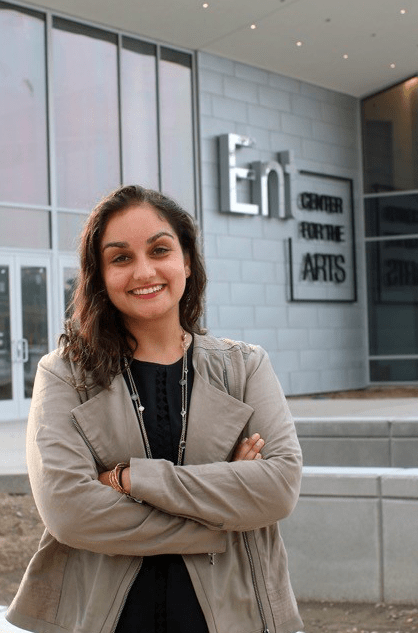 In August, the Ent Center for the Arts, UCCS’ new five-venue arts center, named Aisha Ahmad-Post, producer of the New York Public Library’s flagship series, as the director of the new facility.

Originally from Pakistan, Ahmad-Post applied for this position because she sees this as not only a great job opportunity, but a chance to live and work in the state of Colorado.

“I want to ensure that the Ent Center provides an artistic home for Colorado Springs, the Pikes Peak Region and beyond,” she says, “I believe it is important to make art relevant to as many people as possible.”

Post worked at the New York Public Library for seven years, increasing the number of events hosted by her department from 35 to 130 in two years. Artists and musicians such as Jack White and RuPaul were among those that Ahmad-Post brought to the library.

“I arranged events to be hosted at the library and interviewed various writers,” she says. “People could not only buy their books, but they could also have them signed.”

Ahmad-Post also directed LIVE, a film for the event series that is presented seasonally at the main branch. As for Ahmad-Post’s own artistic talents, she is classically trained in piano, plays the bass and performs ballet.

Drew Martorella, executive director of UCCS Presents, conducted a nationwide search for a director position this spring and reviewed about 50 applications.

Martorella says that he looked for someone with a history in performing arts and an educational background that mirrored their professional background.

““[The applicant] must have a background and understanding of presenting in an arts environment,” he says. “They must also demonstrate an artistic point of view that will not only impact the faculty, staff and students at UCCS but also the community.”

Ahmad-Post was chosen because of her work experience, accomplishments within her field and passion for the arts.

“We were confident that she would be a good fit for the campus and that she knew what the Ent Center needed to make the program sustainable,” Martorella says.

Ahmad-Post will oversee the 780-seat Shockley-Zalabak Theater and the Chapman Foundations Recital Hall. The Ent Center will begin its first series of performances in February 2018.

Prior to her time with NYPL, Ahmad-Post received a bachelor’s degree in piano performance and political science. Following her time as an undergraduate, she received a master’s degree in music theory at the Indiana University Jacob School of Music in Bloomington, Indiana.

The new director has also worked with various art industries such as Columbia Artists Management, an international talent management agency, and Barrett Vantage Artists, which offers comprehensive management services for the music industry.

At Columbia Artists Management, she managed tours for the iconic classical pianist, Lang Lang. At Barrett Vantage Artists, she generated over $70,000 worth of contracts in her first three months, according to her Linkedin profile.

The Ent Center for the Arts will open in January 2018. For more information on the new facility, visit uccs.edu/~entcenter/.