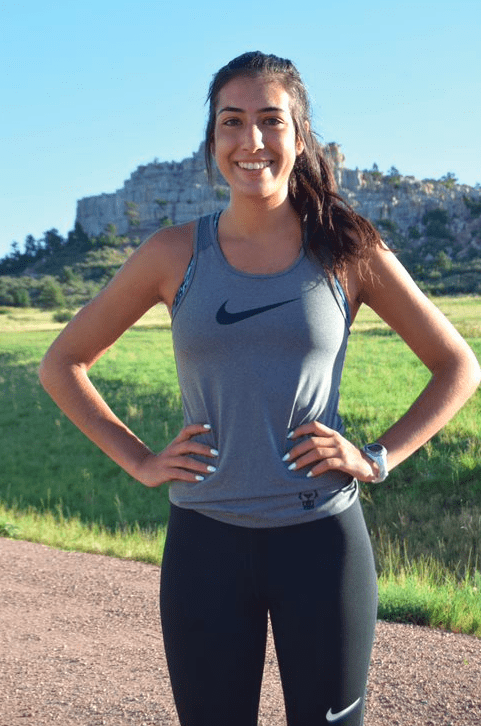 Almasri balances college, cross-country and clubs in a city that is close to her heart

Almasri, who is a redshirt sophomore and academic junior majoring in healthcare science, has been on the cross-country team since she first stepped on the UCCS campus during the fall 2017 semester.

“The girls I met on my recruiting visit as well as Coach Kubatzky really solidified the fact that this was the type of team I needed to be a part of at a university that would bring the best out of me,” said Almasri via email. “UCCS really checked off all of the boxes for me.”

Because she is a Colorado Springs native, Almasri wanted to stay close and be able to continue her story in the city that has always been her home.

“I wanted to be able to still be near my family and friends while also meet [sic] new people in a place that was familiar enough to me that I was comfortable, but different enough so that I could be challenged, said Almasri. “I knew that the university had so many different options for me in any degree I wanted to pursue and that I would be set up for success in the future no matter what route I took.”

Almasri has participated in running clubs since kindergarten and was on the track team in middle school. It was not until high school that she became part of a cross country team. She thought the races were too long, but her coach urged her to sign up for cross country after she received a varsity letter in track as a distance runner.

“I struggled immensely my first season, but I stuck with it ever since!” Almasri said.

“The best part about cross country is the relationships you build with your teammates,” said Almasri. “Cross country is often thought of as an ‘individual sport’ but you will never meet any teams closer than a cross country team.”

Almsari feels that the team has a strong connection and that they are a family with an unspoken language that they use to support each other during races.

The morning of each race, Almasri said that she has a dance party and plays her favorite hype songs. She will have a smoothie and oatmeal as well.

“I like to eat the same thing every race day,” said Almasri. “I also have my special racing socks that I always have to wear with my spikes or flats, for extra luck.”

Right before the race starts, Almasri said that she will say a little prayer in her head and then slap her legs to get her muscles going.

“I’m pretty sure that actually does nothing for my muscles but I have to do it every time.”

Aside from cross-country, Almasri is also involved with the Middle East and North African Club (MENA) at UCCS, which she helped found during the fall 2018 semester.

“I joined with my friends Sara Khammash, Hadeel Khammash and Zano Rana in founding MENA,” said Almasri. “We wanted to make this club in order for other Middle Eastern/North African students to meet and get to know one another as well as teach other students about the culture, traditions and religions of this region of the world.”

Before her college career comes to a close, Almasri hopes to volunteer and shadow more at some imaging centers and get an internship with one of them. She would also like to receive first team All-American honors in a season, be it through cross country, indoor track or outdoor track.