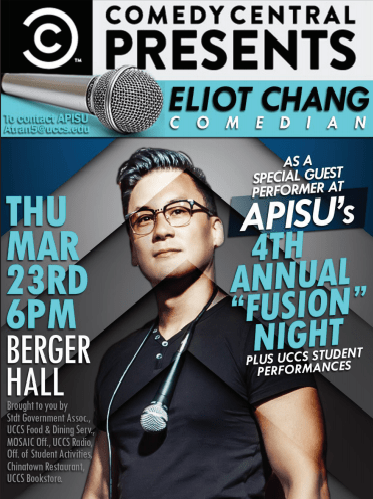 As UCCS promotes inclusivity across the university, some clubs are hosting individual events to promote their own cultural awareness.

Comedian Eliot Chang will perform on March 23 as part of the 4th annual FUSION Night. The event, hosted by the Asian Pacific Islander Student Union, will be held from 6-9 p.m. in Berger Hall.

Chang, an Asian-American comedian, was voted number two in Comedy Central’s Stand up Showdown in 2011. Chang will be doing an hour-long stand-up comedy performance followed by a Q&A about Asian representation in media.

Members of the APISU will also perform a piano duet, and the club’s own dance group will perform.

The event is free to students who will have the opportunity to win prizes and food catered from Chinatown Restaurant. UCCS Radio, Student Government Association, the Office of Student Activities, MOSAIC and the bookstore will sponsor the event.

The APISU will showcase traditional and modern Asian cultural performances and promote cultural awareness among students on campus through the event, according to junior communication major Angel Tran, president of the APISU.

“Growing up as an Asian-American is a very different experience than growing up in Asia. You’re conflicted with very traditional Asian values, yet you’re trying to adapt to a culture,” said Tran.

Students will be able to participate in traditional Asian cultural practices, which will include learning how to dance Bhangra, a traditional dance that originated in Punjab, India. The Colorado Bhangra Dance group will teach participants.

The APISU club has nearly 50 members and is becoming more active on campus. The club welcomes anyone interested in Asian culture, said Tran.

“We want people to come and have fun and maybe learn something new,” he said. “We have one of the most diverse clubs on campus.”

This year is also the 10- year anniversary of APISU. The club’s mission is to build a more inclusive community at UCCS and to encourage diversity and acceptance in the community.

“It’s a very family-like atmosphere. Whenever we have problems in our families or at school, we can come to each other,” said Tran.

Club members are welcoming to outside students who are interested in what the club has to offer, according to freshman computer science major Gabe Ganuelas, club member.

The APISU host many events throughout the semester, with FUSION being the largest and most popular. According to Tran, the past three years have had a big turnout, with 200-300 attendees.

“As a freshman, I thought it would be really hard to make friends in college,” said Ganuelas.

“You always hear that the people you meet in college become lifelong friends, and I feel like I’ve found that through this club.”

For more information on FUSION or to join the Asian Pacific Islander Club contact Angel Tran at [email protected] edu.

2017-03-22
Previous Post: Research your opinions, use facts and evidence for support
Next Post: New degree to be offered this fall in response to high employer demand