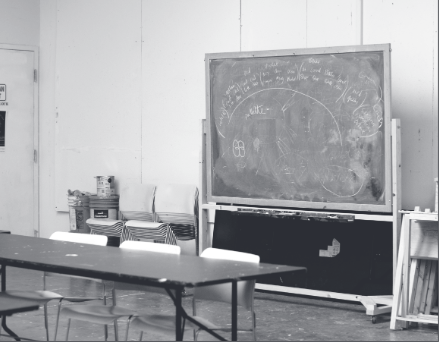 By: Caitlyn Diekmann
In: News

Art club president Jem Brock’s work will be featured at the first exhibit hosted by the club this decade. The exhibit, originally scheduled for Feb. 7, was rescheduled to March 13 at 7 p.m. because weather conditions closed campus on the original date.

The show will also be available the following Saturday and Sunday, March 14 and 15, from 1-4 p.m. “The show focuses on creation myths, so I use calligraphy to make abstract forms and each drawing focuses on either a different creation or an amalgam of creation stories,” said Brock, a senior visual arts major also pursuing an art history minor.

Brock’s exhibit, titled “In Inceptum Finis Est,” is Latin for “In The Beginning, Is The End.”

The art club plans to host more exhibits as well, with a club group exhibit scheduled for April 24. The pieces for that exhibit are still being chosen. Brock said that it is too early to decide who to feature in the group exhibit.

The club is curating pieces from members and evaluating member participation in the club to see who will get a chance to participate in the group exhibit.

Both Brock’s and the group showings will take place in Centennial 280, also called the Dock.

Every show is student-curated, according to Brock, and the Visual and Performing Arts department pays for all the catering as they are a department-recognized organization. The club also has funds and they can request money from the Student Government Association.

Club members will rarely have to pay for anything out of pocket.

Putting together the exhibits is a group effort, according to Brock, who only makes executive decisions when necessary. Brock said that everyone works together to figure out how to display the exhibit in the space available.

Martha Wheeler, a senior visual arts major, is co-president of the club alongside Brock.

“[The club] is a very inclusive environment for artists to find themselves,” said Wheeler. She also said that the club gives members a chance to cultivate relationships.

When Brock took over the club it was inactive. The two-person team tries to organize gatherings once a month, according to Brock.

“It pretty much got a complete overhaul when I took it over because there was no one running it at the time,” said Brock. “There wasn’t anyone to teach me how to do things.”

Gatherings include sketch nights, open critiques, and students also get opportunities to hang out or talk with artists that present their exhibits or shows through GOCA or down at the Ent Center. “We don’t really have meetings except at the beginning and end of each semester to talk about the things we are doing,” said Brock. “Other than that, we just host events.”