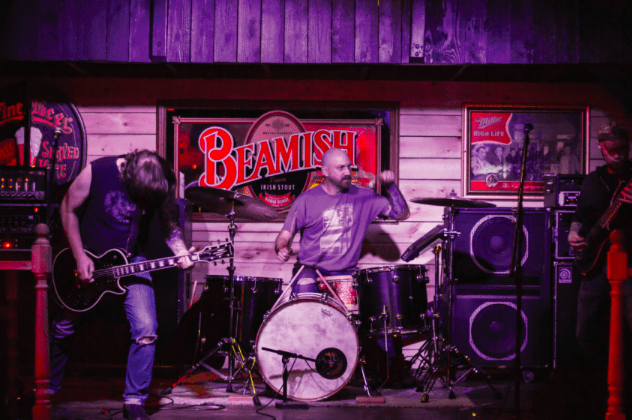 Aseethe prefers a hypnotic state of mind over rage filled

The Triple Nickel Tavern seems to be the perfect place for a talkative 80s cover metal band to encourage people to socialize. , The bartenders tipped out and concert goers reminisce over how flavorless the Miller High Life was.

When Aseethe took stage Tuesday night, they chose their words carefully in an attempt to have a sober conversation with the crowd through complex time signatures and droned out mesmerizing riffs.

On August 14, the Triple Nickel Tavern, located on Wahsatch and Colorado Avenue , hosted Aseethe, the doom metal three-piece from Iowa City for a rather quick 30-minute set.

Represented by the New York record label Thrill Jockey, it’s the Hawkeye State locals that have licensed the fine art of the drawn-out, repetitive riff that melts and morphs into something cataclysmic – most certainly a formula of writing that fits perfectly in Thrill Jockeys catalogue of adventurous tunes

In between Steelers memorabilia, a Flash Gordon pinball machine, and a small bar, 45 to 50 listeners leaned against Aseethe’s loud, brooding sound where they instantly teleported attendees 45 to 50 feet underground to Aseethe’s personal hell, where peeling lead paint and ethereal riffs were at no expense to them.

Surgically removing the high past tempo, speedy solos and the classic palm-muted chug, Aseethe has revitalized the genre of metal, a sound that is as blemish-free as its counterparts.     Aseethe, a band of few words, chose to save their guttural screaming wisely, while the melodic arpeggiation of “Sever the Head (part II)” and the six minute stoner sludge song “Sever the Head (part I)” showed just as much emotion through their musical compositions.

The progressive doom metal nature of Aseethe forced attendees to be patient that night as the group of musicians, loud enough to be a four piece, yet simple enough to be a three piece, unapologetically structured their songs to break the typical barriers of heavy metal songwriting.

Aseethe’s riffs were heavy enough to keep all attendees laser-focused, but were droned out long enough to keep listeners, who were by now multiplying, and guessing where the song was going next.

Once the set came to a sudden halt, the audience members surfaced back to reality, where ears ring after standing next to large amplifier cabinets.

The stage being only a foot or so high off the ground, Aseethe’s confidence and cohesiveness made the band look and sound like giants – because to Aseethe, the 45 attendees were 100, the bar lights being turned on and off occasionally to serve customers was mood lighting and the headliner waiting patiently in the back next to their merchandise had already played.

Something that a Pitchfork Magazine review, a mention in the New York Observer and opening for a spew of noble avant-garde doom metal projects will do to any young group of musicians.