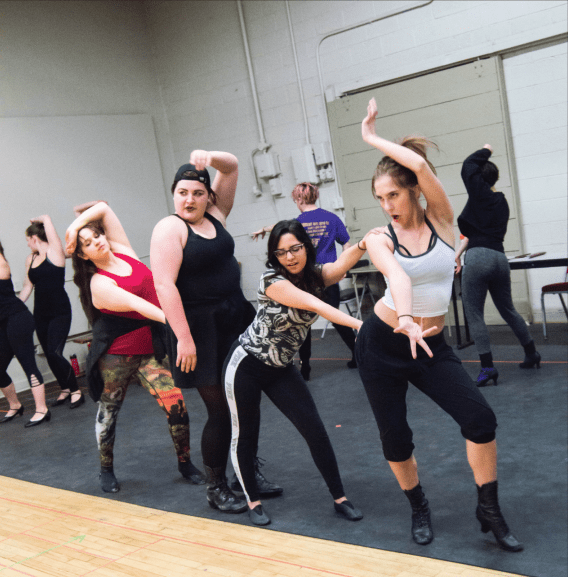 Behind the scenes of ‘Cabaret,’ a UCCS Theatre Company production

By: Anne Stewart
In: Features

When putting on a theater production, every element and detail of the show contributes to the creation of a three-dimensional world.

The work is ongoing: preparation, research, rehearsal and taking risks on stage.

Students who are part of the UCCS Theatre Company are working on stage and behind the scenes to create “Cabaret,” a production surrounding the history of Germany leading up to WWII.

The rendition of the classic musical will open March 16 on the TheatreWorks stage in the Dusty Loo Bon Vivant Theatre. “Cabaret” will be directed by Kevin Landis, director of the theater and dance program and assistant professor in the visual and performing arts department.

Landis said that the show will display the collaboration of theater, dance and music. Other aspects that are being worked on include set design, props, acting, music and choreography, all to create the right atmosphere.

The Scribe received the opportunity to go behind the scenes of a “Cabaret” rehearsal, to document and picture the work students put into every aspect of the show and talk with several people involved in the creation of this production.

The history of ‘Cabaret’

According to Landis, “Cabaret,” first performed in 1966, is a legendary musical. Composed by John Kander and written by Fred Ebb and Joe Masteroff, the story is set around a night club called The Kit Kat Club in 1931 Weimar, Germany. The show displays the tension set around the growth of the Nazi Party.

“As you would find in any club of this ilk, a lot of unusual people with various needs and hopes and dreams and so forth. As we, the audience, watch it, we know that Germany is on the brink of descending into Nazi rule, the rise of Hitler and of course World War II and the Holocaust,” said Landis.

“When we watch it from our contemporary standpoint, there is this feeling of foreboding woven throughout the Kander and Ebb musical.”

Landis added that he hopes the production will demonstrate and explore the social and political situations from that era.

Along with the fun and satisfying aspects of musical theater, the crew has challenges to consider when putting on an important historical piece.

“When you’re dealing with ‘Cabaret,’ it is important because of the era that it was set, because of what we know about the immediate history thereafter, and that you give due and you give reverence and respect to that history,” said Landis. “Yet, at the same time, theater must feel contemporary. We must feel the pressing need to learn something from what we’ve seen on stage. The answer is to remind myself, to remind the students (that) we have a story to tell.”

The show will create an integrative atmosphere for the audience, who will have the opportunity to sit in tables close to the action.

Landis said that design is part of the foundation for the show.

“So much of what this piece is, is design. It’s about winding your way through passageways and finding yourself in this warm, inviting place. By the end of “Cabaret,” it is a little less warm and a little less inviting because of the historical context,” said Landis.

Molly Gillard, a junior majoring in film with a minor in theater and assistant scenic designer for the show, said that set decoration is one of the largest projects.

“It will be difficult to get the space to work. We want it to feel very cozy, and that space is not very cozy,” said Gillard.

The crew will try to employ different details to combat this, such as finding mismatched chairs for the audience to sit in order to create a warm feeling.

Some other aspects that the crew will work with are the practical elements of sound, audience seating and safety concerns, along with other problems that could pose both challenges and inspire artistic choices, added Gillard.

Jess Carmona, a freshman majoring in theater and minoring in biology, is one of the students working on props.

Carmona and a few other students sit in on rehearsals to determine the needs of the show, asking what objects fit where. The crew then tries to find pieces that draw time parallels between the 30s and now.

The acting for ‘Cabaret’

Junior theater major and minor in music and dance Brittany Merritt said that, at this point, the cast has learned the music, memorized lines and everything is choreographed and blocked.

Now the work comes with looking closely at details after the fourth week of rehearsal, according to Merritt.

Merritt will play the role of Emcee, which is usually played by a male actor. She said that the process so far has been an adventure.

“That (aspect) has an entirely different kind of research, figuring out gender behind this show.”

Merritt’s experience in the rehearsal process has been especially interesting because of the nature of her lines in the show, most of which are ad-libbed or based off of audience interaction.

It is important for the cast to think about what they are bringing to this production as Americans in 2017, according to Landis.

(The Scribe copy editor, Eleanor Sturt, is cast in “Cabaret”).