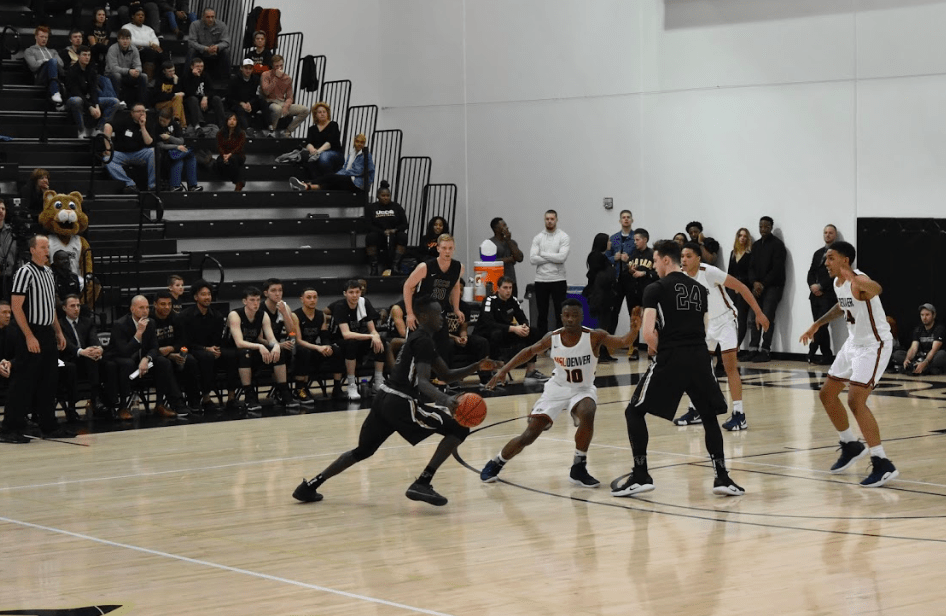 Women’s and men’s basketball faced off against the Metro State University Roadrunners in the annual Blackout Night game, with the women winning 84-69 and the men winning 71-70 at the Feb. 8 games.

The women’s team kicked of the night, keeping MSU’s shooters to just 33 percent in the first half. Off the bench, junior Madi Gaibler made 12 out of 16 shots for 29 points which was a career high.

Junior Chelsea Pearson and sophomore Tatum Tellin combined for seven three-pointers made, with five of them coming in the second half.

UCCS was able to keep MSU quiet from the three-point range in the first half, with the Roadrunners going 0 for 7. Overall, the Mountains Lions held MSU to 33 percent shooting in the first half.

After a first half with 14 points and shooting 62 percent, on five out of eight shots, Gaibler continued her performance by going seven out of eight from the field with 15 points in the second half.

Junior Caley Barnard scored eight of her 10 points after halftime.

MSU’s struggles from the perimeter continued in the second half, with the Roadrunners only nailing one three-pointer on ten attempts.

MSU Sophomore Mikayla Gonzales, who made three of four baskets for eight points in the first half, was held to just two points in the second half.

The Mountain Lions never trailed at any point during the game and shot 64 percent from the field in the second half.

Prior to the men’s game, UCCS alumni Alex Welsh had his jersey retired. Welsh is the second men’s basketball player to have his jersey retired, following CU alumni Derrick White, who transferred to Boulder from UCCS in 2015 and currently plays for the San Antonio Spurs.

The men pulled ahead early against the Roadrunners, starting off on a 15-0 run in the first seven minutes of the game. The Mountain Lions were able to hold MSU to just 24 percent shooting from the field in the first half.

Junior Padiet Wang lead UCCS with 10 points in the first half, shooting five out of seven from the field.

Wang was kept silent in the second half, scoring just two points.

The Roadrunners took their first lead of the game with just under two minutes to play. While the Mountain Lions lead by 19 at one point in the second half, several turnovers during the late stages of the game allowed MSU to close the point gap.

Senior Elijah Ross, who committed a crucial turnover just before MSU took the lead, redeemed himself by hitting four free throws in the last minute of the game to give UCCS the lead.

Redshirt junior Blend Advili lead the Mountain Lions with 15 points while Asah finished with 31 points for the Roadrunners. UCCS had a significant advantage in points from inside the paint, outscoring MSU 28-8.

The men also won on Saturday night against Chadron State by a score of 97-87. Their next game is against CSU Pueblo, right after the women’s game, starting at 7:30 p.m. Their final home game of the season is also against New Mexico Highlands at 7:30 p.m.