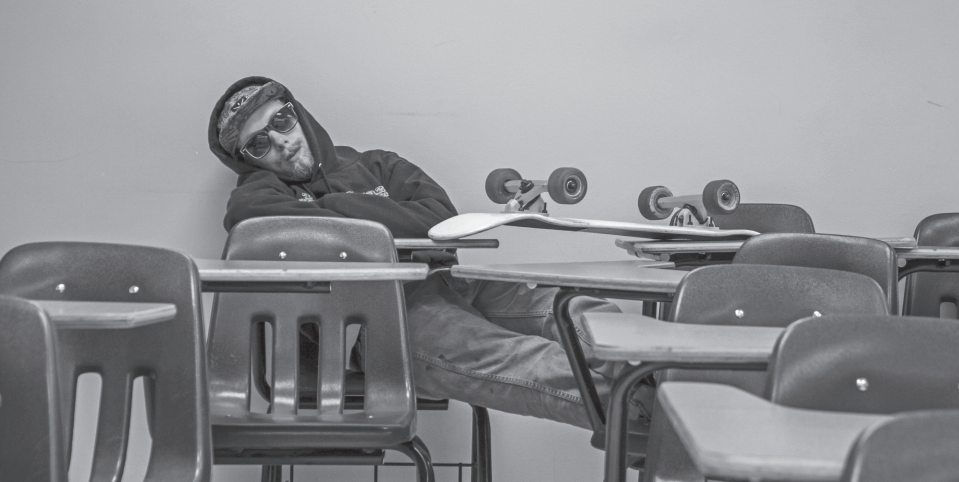 Chill dude in back of classroom deemed dead since January

Campus police determined on March 30 that fifth-year sophomore and chill dude in back of class “Rad” Brad Brofield has been dead since early January.

Brofield, who sported designer sweatpants and his father’s Harvard Law hoodie succumbed to the numbing effects of his lifestyle choices, according to investigators.

“At this point, we believe Brofield suffered an irreversibly blown mind during a YouTube clip from Planet Earth shown on the first day of Intro to Petting Zoology,” said Public Safety officer Brian Man.

The sprawling Brofield, his Beats by Dre headphones and the wheel-less, sticker laden longboard he carried around occupied approximately four desks, though classmates said he slumped appreciably during week five.

Brofield’s body was well-preserved by the bleak, windowless atmosphere of Columbine 103, and his body spray masked any other odor on campus, according to mortician Yool B. Heresoon.

“At first we thought the cause of death was Axephyxiation,” said Heresoon. Though inspectors could not initially discern the time of death, toxicologists determined that the Red Bull Brofield clutched in his Miller Lite koozie was opened in midJanuary.

While the reclined Brofield appeared comfortable to those around him in his raised hood and dark Ray Bans, there were several early warning signs.

“He didn’t even buy pizza rolls with his tax return,” said Brofield’s nine-time exgirlfriend, whose name he often confused.

Further, Brofield failed to bet other people’s possessions on his March Madness bracket for the first time in six years.

“Our analysis reveals that Brofield’s social media presence declined significantly in early January, though he evidently had one of those viruses that bombarded friends and family alike with topless models and fake discount sunglasses,” said Man.

“Additionally, several of his boys tagged him in photos of previous spring breaks, so things likely seemed entirely normal to those who knew him online.”

Several of Brofield’s classmates remembered his cool demeanor in the classroom.

“I really looked up to him, man. He wore those Jordan flip flops straight through snowboard season,” said the dude to his right, who wears the same Tapout T-shirt to class each Monday.

“Man, I always thought he was just high,” he continued, fighting off tears.

“I was literally, like, so relieved to see the news on my Snapchat,” said the anonymous blonde to Brofield’s left, who found him deeply mysterious and has leaned precipitously toward him the past seven weeks.

“Now I know why he never asked for my number.”

“I think Brad would have done very well in the course. I’ve never seen such excellent attendance, and several students expressed interest in being in his group for the final project,” Soskrud wrote in an email.

“In retrospect, I should have known something was up when he had perfect attendance on week three.”

Services will be held in the free lot at Red Rocks Amphitheater prior to the Mount Kushmore concert featuring Snoop Dogg, Wiz Khalifa and Cypress Hill, among others.

In lieu of cards and prayers, Brofield’s boys request that mourners “roll a fatty for Rad Brad.”

“I know he’ll be looking down on us, sending good vibes.”

At this time, it is unclear whether Brofield had ever successfully enrolled in classes and whether he will continue his run for president of SGA.