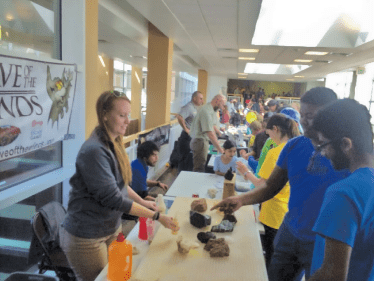 UCCS, a campus that offers degrees in several scientific fields, was all about science for one day over the weekend.

On Oct. 8, UCCS hosted the sixth annual Cool Science Carnival Day on campus, and exhibitions that ranged from cave simulations to robotic exhibitions were on display for attendees of all ages.

The Cool Science Carnival Day was created as the official start to the Colorado Springs Science Festival, a nine-day event where science themed attractions are set up across the city.

But at UCCS, visitors enjoyed attractions set up throughout the campus. Del Wheeler, a patron at the event, brought his 5-year-old daughter to the festival.

They enjoyed their day at the festival and liked one exhibit in particular, said Wheeler.

“The dinosaur exhibit,” Wheeler said, “(my daughter) really loves dinosaurs, so for her, that’s great.”

Michael Steinman who also attended the event, was more impressed with other exhibitions such as chemistry based displays.

“We’ve gone to a few of these events,” Steinman said. “We went to the chemistry magic show and we were all impressed with that. That was really cool.”

While the purpose of the event was to encourage interest in the scientific field for kids of all ages, exhibitor Veronica Clayton, who is part of Creekside Kids and Blue Skies, thought that the high turnout resulted in a high level of participation as well.

“I have been here for about half the day and it come in waves,” Clayton said. “We’ve had a pretty good turnout this year, and the families seem to be very involved. There are a lot of very different aged kids here, from the very young to the high school aged.”

Clayton was exhibiting at a station called the Make Your Own Slime display, and she explained how the exhibit was meant to interest kids of all ages through what she called kitchen science.

“It’s really great for sensory play as well because children love to get their hands messy and exhibit other tactile situations,” Clayton said.

“It’s also a good way to do basic kitchen chemistry with kids so they can see basic chemical reactions and physically see them happening.” Clayton also explained that the exhibit was inspired by activities from her own education center.

“We really encourage hands on learning with children; so this is something that we would do with our children at our centers.”

2016-10-12
Previous Post: Tattoo shop review: where to get inked and where to avoid the pain
Next Post: Saudi Arabia club celebrates Saudi Arabian Independence Day