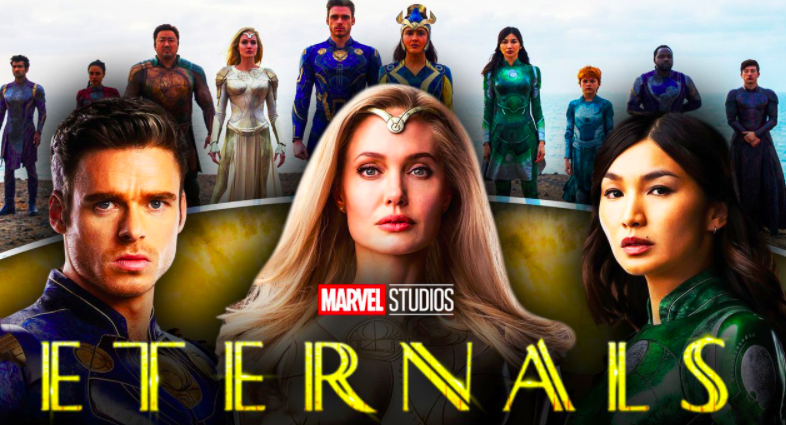 ‘Eternals’ entertains but takes on too much in 157 minutes

Marvel has graced fans with yet another feature, another story, another cast of characters tasked with saving the world in “Eternals,” the Marvel Cinematic Universe directing debut for award winning director Chloe Zhao.

The latest comic book-inspired plot sees a group of 10 superpowered beings — Eternals — sent to Earth centuries before present day to combat a race of monsters called Deviants. The immortal beings were created and assigned the task by a Celestial — a giant space god — called Arishem.

The 10 Eternals are a diverse group creatively named after legends of the past, implying that these legends of old were actually written about the Eternals. For example, Sersi, portrayed by Gemma Chan, is a reference to Greek goddess Circe who could change people to animals. Sersi in “Eternals” can transform matter.

Ikaris (Richard Madden), a reference to Icarus from Greek mythology, can fly and shoot laser beams from his eyes. Among the others, Sprite (Lia McHugh) can create illusions, Druig (Barry Keoghan) can control minds and Makkari (Lauren Ridloff) has super speed.

Through flashbacks, we learn that the Eternals went separate ways and integrated with society across the world after they defeated the Deviants a couple thousand years ago. However, these monsters begin reappearing in the present day.

The Eternals regroup after this development, only to learn that they have lost one of their own during their time apart, and Arishem shares that their true mission all along was different from what they originally believed.

The two-and-a-half-hour movie took a while to get some momentum and was bogged down by one too many flashbacks at the beginning. While the historical context was necessary to introduce the Eternals, it could have been limited to two or three flashbacks, instead of four or five laden with conflict.

The ensemble cast also got a late introduction to the plot due to the structure of the film’s outset. The script finally breathes life into the characters about one hour in, but once we learn more about the crew, they don’t seem capable of really saving the world.

The mannerisms and personal flaws of the characters feel too juvenile for beings of such a rich history and superhuman ability — and some of the characters just fell flat, like Angelina Jolie’s portrayal of Thena, an expert warrior. It is a big task to introduce an entirely new ensemble cast in one feature film, and we got to know each Eternal to some extent, but I was left needing some more meaningful character development.

Even the love story between two main characters was weak. It served its purpose, but was unconvincing, with the extent of their connection shown through silent proximity and an unnecessary — and super underwhelming — sex scene.

This sex scene is a first for Mavel but wasn’t the only novelty in the film; “Eternals” also featured the first deaf superhero, the first openly gay superhero and the first death by suicide in the MCU.

Ultimately, “Eternals” was entertaining with a healthy dose of humor, mostly from Kingo (Kumail Nanjiani) — Eternal turned Bollywood star — who enlists his chauffeur to document their mission vlog-style.

The action sequences and visual effects also did not disappoint; this is Marvel after all. The CGI generated Deviants were especially well crafted, with diverse forms but a similar appearance and equally chilling presence. The final action sequence wasn’t as grandiose as, let’s say, “The Avengers” when aliens descend on New York, but it was visually impressive.

I would argue that “Eternals” isn’t as sound as the rest of the franchise, but it is worth seeing, especially for those who are fans of the superhero genre. We can also be sure that this film will be a jumping off point for a number of future movies. If anything, one of the post credit scenes — in all of its shocking and heart-stopping glory — will give Marvel a lot to work with moving forward in Phase 4.