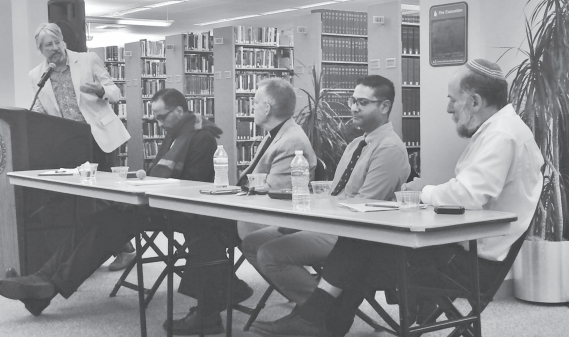 Faith, Violence, & the Promise of Dialogue creates conversation about religion and violence

Unfair representation of religion can be problematic for those who practice their faiths, especially with unfair connotations that religious traditions lead to violence and war.

The Center for Religious Diversity and Public Life hosted Faith, Violence & the Promise of Dialogue on Oct. 27.

Four local religious representatives discussed their religious tradition’s view on violence during the event, which was part of the Moving through Violent Times series.

Jeff Scholes, director for the Center for Religious Diversity and Public Life at UCCS, started the event by introducing each of the panelists. Each panelist had 10 minutes to explain their religion’s view on violence.

Scholes’ explanation was followed by a Q&A, where audience members had the opportunity to ask the panel questions.

Joe Charnes, local Jewish scholar and teacher, was the first of the panelists to speak about Judaism’s view on violence. Peace is the highest and noblest of all aspirations in the Jewish tradition, said Charnes.

“I can tell you up front (that) I have no idea how to solve religious violence, but today is a good start,” said Charnes.

Judaism does not condone violence; it does not idealize pacifism as a moral response, according to Charnes. If one has to use violence to protect innocent life, it is acceptable.

The next speaker on the panel was Ronald Patrick Raab, lead Catholic pastor in the Tri-Community Parish of Colorado Springs.

Raab spoke on his experience in encountering violence as a pastor. Raab’s main point about violence in the Catholic tradition was that the religion always tries to build conversations and relationships with people.

“People matter, but we have to be in relationships with people who are different than (us),” said Raab.

Pope Francis has encouraged a revolution of tenderness, a message the core of the Catholic tradition, according to Raab.

Ammar Naji, assistant professor of Comparative Literature and Arabic at Colorado College, continued the presentation by discussing violence in the Muslim religion. Naji has dealt with questions about violence and interfaith dialogue in the academic world.

“So many of my students ask me if Islam is inherently violent, so I try and engage them in conversation about it,” said Naji.

Naji noted the three ways that prevent us from knowing each other fully: fear mongering, ignorance and the lack of an education system where we get to experience each other’s beliefs.

In order to move forward, society must fully educate themselves and experience things fully, even if they are uncomfortable, said Naji.

Packiam addressed how Christians began to think about violence. He stated Saint Augustine’s three reasons for violence: war has to have a just purpose, war has to be led by an institutional authority and it has to be motivated by love.

“Wars were not purely over religion. They were political, secular and humanitarian,” said Packiam.

Packiam agreed with the other panelists in that each tradition may have a different view on violence, but within those traditions there are many variations and views about what constitutes violence.

After the four panelists spoke, the Q&A began.

The first question from Charnes to the other members of the panel was, “is violence permissible? Is it a viable or moral option when there is no other option?”

The three other members of the panel discussed their opinions and gave insight into what constitutes violence, providing examples of situations where violence could be considered appropriate.

The university should provide resources to help students deal with tragic events that impact the community, according to Kee Warner, associate vice chancellor for Inclusion and Academic Engagement in the Department of Sociology.

“Every day, it seems like there’s something else, and we feel that as a university this should be a place where we don’t turn away from these horrible things but move toward them and help our students and colleagues think about how we can move forward,” said Warner.

2016-11-01
Previous Post: The suicide battle isn’t over; we need to keep the conversation going
Next Post: Campus budget pays for maintenance of old buildings, expansion of ENT Center