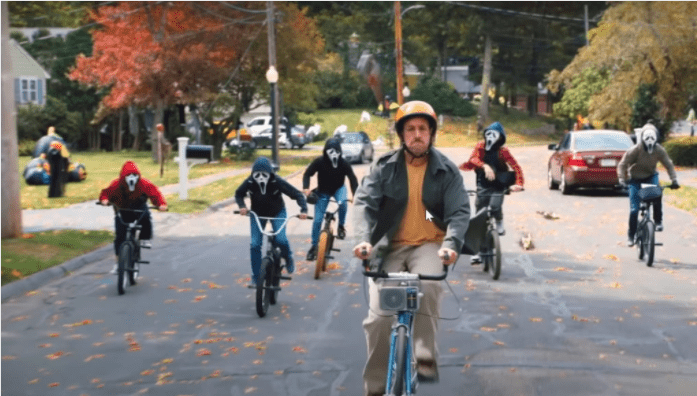 Adam Sandler is back with another irreverent, goofy movie filled with his classic slapstick humor and a lot of fart jokes. And I am a fan of fart jokes, which is why this film was enjoyable for me. If this is not your taste of comedy and you do not like his previous films, then this one is not for you.

It is not Sandler’s best outing, nor is it his funniest movie. But what makes this one different than his recent efforts are the heartfelt anti-bullying messages that are layered beneath the humor. Sandler has had family-friendly morals at the center in his past movies, but with the constant hate and bullying that occurs online today, this is an important lesson that hits home.

“Hubie Halloween” takes place in Salem, Massachusetts on the night of Halloween. Thousands of people visit the town every year because of its history. Citizens of all ages take this holiday extremely seriously — almost everyone has a costume, and almost every house has decorations on it.

Hubie, played by Sandler, is ruthlessly messed with by everyone in Salem. Halloween is his favorite holiday, and he spends it every year walking around the town to ensure that people of all ages are safe. He constantly warns the police about minor inconveniences to the point that they just hang up on him every time he calls. And they aren’t the only ones that don’t take him seriously.

Everyone in town uses his helpful personality against him; we watch people play trick after trick on him just so they can laugh.

But one person sees Hubie for his kindness: Violet Valentine, played by Julie Brown. She constantly defends him and labels him as a kind guy that does not deserve the abuse he receives. She also secretly likes him, and he secretly likes her.

When people in the town begin to go missing, Hubie is forced to solve the mystery. Some of the most hilarious sequences come from this portion of the film, including one involving a basement and werewolf poop. Silly, I know, but it is funny.

The usual crew that act alongside Sandler are also in this film, including Kevin James, Rob Schneider, Steve Buscemi, Maya Rodolph, Tim Meadows, Dan Patrick and Shaquille O’Neal. These actors have so many roles in his movies that I got excited every time one of them appeared on the screen in “Hubie Halloween.” It was like seeing a group of friends that you love at a party, the friends that come to every single one. They would never miss it.

Fans of Sandler will also be pleased to find several references to his older films, including a scene with Ben Stiller playing the same character from “Happy Gilmore.” Honestly, this was my favorite part of the movie — it is hard to write and think about it because of how much laughter it brought me.

But as I said earlier, it is not the humor that I think makes this movie better than it is, because from an objective viewpoint — this is not a good movie. There are no performances that stand out, and its directing, editing and cinematography are nothing special. But it serves its simple purpose and simple plotline with a strong anti-bullying message.

The reason people bully, according to the movie, is to make themselves feel better for their shortcomings. I hope young people take this lesson to heart because bullying is out of control online, and sometimes, art is the best platform to teach important lessons.

Despite the 3-star rating, I do want to end this by saying that I am a huge Sandler fan. His films are special to me because they have a lot of connections to my childhood. I even imitate his voice for laughs with my friends, but this is not his best movie. It does not compare to his classics like “Waterboy” and “Billy Madison,” but I still had some fun watching it.

If you are looking for scares in a Halloween movie, try the horror category on Netflix. But if you want silly, goofy humor that makes you chuckle, then “Hubie Halloween” is perfect.

“Hubie Halloween” is currently streaming on Netflix, so you can watch it in the comfort of your home.

2020-10-29
Previous Post: Students celebrate 21st birthdays during COVID-19
Next Post: BREAKING NEWS: Most classes to be remote after Thanksgiving