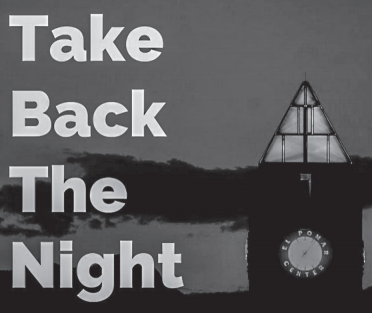 One in five women and one in 16 men will be sexually assaulted while they’re in college, according to the National Sexual Resource Center. Respect on Campus hopes to bring awareness to these statistics and other issues that surround sexual assault.

Respect on Campus will host the fifth annual Take Back the Night on April 26 in University Center 302.

Take Back the Night is Respect on Campus’s last event of the semester. Traditionally, the event seeks to bring awareness to sexual assault and rape.

Students should attend the event because they may likely know someone who has been a victim of sexual assault, rape or sexual violence, according to Ethan Wade, outreach and awareness coordinator for Respect on Campus.

“At UCCS, we want to foster a culture that supports survivors of sexual assault and domestic violence, stalking or any other crime like this,” said Wade.

“We want to people to know that yes, it’s important to see movies like ‘The Hunting Ground’ and know that those kinds of things are happening, but that’s not going to be the response they get if they come and disclose (their offense) at UCCS.”

The event will feature guest speakers, including Wellness Center staff psychologist Trent Claypool, two UCCS police officers, including police sergeant Lisa Dipzinski and Amanda Chance, a UCCS alumna who now works with TESSA, an organization that helps women and children who are victims of sexual assault and domestic violence.

The event will begin at 7 p.m. and is open to the public. Free pizza and drinks will be provided.

An important aspect of this year’s event is to promote an engagement of men as bystanders and advocates, said Wade.

“While anyone can be a perpetrator or victim of sexual violence, the statistics show that close to 99 percent of perpetrators are male against women and other men,” he said.

“It’s one thing to try and come to people and say, ‘We have a campus that will support you if you disclose,’ but the really proactive thing to do is to stop some of these sexual assaults to begin with.”

In past events hosted by ROC, many of those who attended said that they felt helpless, according to Wade.

Wade added that the theme of this year’s event was to empower those to feel like they could help someone they knew who was affected by sexual assault.

“We want people to walk away feeling like they’re empowered to go and make these changes,” he said.

Each year, Respect on Campus holds their own event, which includes a presentation featuring several guest speakers and a march across campus.

Unfortunately, this year’s event will not include a candlelight vigil, which honors victims of sexual assault and domestic violence, due to fire safety concerns.

Take Back the Night, which is both a nonprofit organization and international event, began in March 1976 to end sexual and domestic violence.

Between 2013-2015 at UCCS, there were zero offenses of rape, sodomy and sexual assault on campus, according to the 2016 Annual Security and Fire Safety Report.

But UCCS’s focus is not on the numbers, according to Wade.

“While we are concerned with having a low number (of reports), we care more about our students than having a number to put on a postcard or handout. It really is people-centered, and we want people to understand that from Take Back the Night,” said Wade.

Wade said that students who are victims of sexual assault report the offense to a variety of sources on campus, including the Dean of Students, the Office of Institutional Equity and the Wellness Center, but many can report off campus, including private counselor, the Colorado Springs Police Department and Memorial Hospital.

“It’s important that people don’t respond with victim-blaming behaviors that might make a survivor feel like what happened to them was their fault,” said Wade.

Students who know someone or who may be a victim of sexual assault or domestic violence can report the incident to the Office of Institutional Equity by calling 255-4324.

2017-04-16
Previous Post: Ent Center for the Arts nears completion of construction, details to be determined
Next Post: Early April crime: reports of theft, drugs on campus, crime in surrounding area