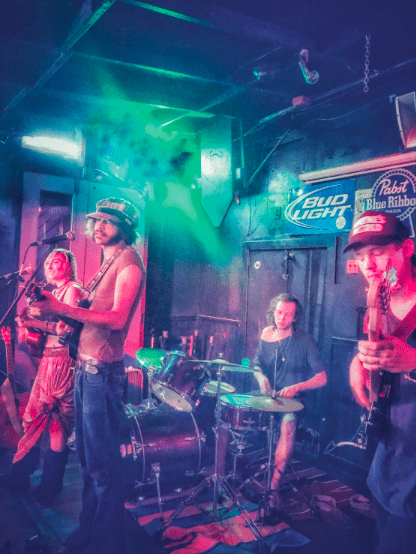 Formation of The Barefoot Family Caravan

There are few modern bands that make you feel as if you’ve time traveled back to the year 1969 – the time of Woodstock, psychedelic blues-funk and hippies  beatniks.

However, The Barefoot Family Caravan does just that with their nostalgic vibes.

After listening to their unique sound and looking at their style, I couldn’t help but wonder about something that is rarely discussed when talking about bands: how they came to be.

It is unusual to know exactly how band members met, and how they became one unit. Oftentimes, the story of how a band forms is captivating and can tell a personal story of each band member.

Every band has a compelling story behind their formation. Band formation stories are just as unique as the music they play.

“I guess it all started a couple years ago when I moved back from Oregon,” said vocalist, Kiera Lynn Love. “I was playing a lot of open mics in Manitou.”

Eli Blackshear, the band’s lead vocalist and guitarist, discovered Kiera at these open mic nights that he was hosting at the Ancient Mariner in Manitou Springs. Once Blackshear found Kiera, his friend Micah Dettling, who was also looking to expand his music, became a part of the band. Dettling is now the band’s bassist.

Blackshear, Kiera, and Dettling were all living in a house in Manitou Springs when they met Skip at an open mic night. At the time, Skip was a traveler and needed a place to stay.

When the four bandmates started to have jam sessions in their house in Manitou, the vision of the band began to form.

“Every Thursday we would play at an open mic night when Manitou was the forefront of the music scene,” said Kiera.

The band decided to go out on the road to Oregon, where Kiera moved from, to try to play in some gigs and go on their first tour.

“The first round taught us how to live together in a cohesive group out on the road,” said Kiera in regards to their first tour.

The Barefoot Family Caravan just finished their most recent tour, which began in Eugene, Oregon, then moved down the west coast to California and migrated south to Austin and New Orleans. The tour eventually concluded in Florida. During this tour, the local band played at venues such as the Brick & Mortar in San Francisco and the Whiskey a Go Go in Hollywood.

The entire tour was spent traveling in the 40 foot school bus that the band repurposed as their tour bus. Not only was the bus revamped by the band members, but local street artists in New Orleans painted murals on the bus.

When this band first formed, they had to come up with a band name in a short amount of time.

“We had a 30 minute brainstorming session to come up with the name,” said Kiera. “We thought the name was indicative of the theme and the vibe that we have.”

Even though much of this band’s essence was unplanned, Blackshear always had a vision for what he wanted it to look like.

“We met in kind of an odd way,” said Blackshear.

You can’t help but think that the formation of this band required a combination of fate and possibly some luck. However, Blackshear always believed in this band because they were the only ones willing to “go out and do the damn thing.”

There are many famous bands in existence, but few have the reminiscent feel of the 60s and 70s in every song they play. The formation of The Barefoot Family Caravan takes listeners back to a time when music was raw and a band’s eccentricity was valued.

Their formation story is inspiring for not only musicians, but also for those who have a great appreciation for music in general.

2018-08-28
Previous Post: Aseethe prefers a hypnotic state of mind over rage filled
Next Post: A Segment dedicated to connecting students with the community: Switchback Coffee