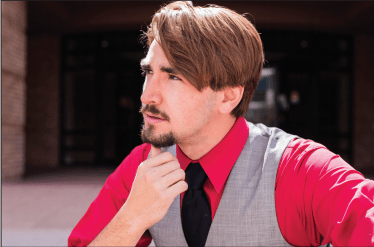 By: Daryn Vlad
In: Culture

In his most recent student production at UCCS, junior theater major Jareth Spirio enjoyed portraying, a Nazi, in “Cabaret.”

“It feels good to make an impact,” he said of the show, which takes a critical look at the negative impact of the Nazi movement on Germany.

Spirio won gold for Actor in The Gazette’s 2017 Best of the Springs on April 13, where he was nominated for his performance in “Too Much Light Makes the Baby Go Blind,” an interactive play with two 30-minute sections composed of audience suggestions on what to perform.

Spirio is president of the theater program – a degree he didn’t originally consider. Spirio said that he wanted to attend UCCS temporarily and transfer to New York University, his dream school.

Now, Spirio is working to help the program and VAPA Department in their growths.

He plans to move to Denver after graduating next year to get his equity card, which serves as proof of membership to professional acting unions and makes a difference in how much an actor is paid.

Once he achieves this, Spirio said he plans to move to New York to further his career.

A career in professional acting was a dream of Spirio’s from a young age; as a child, Spirio acted in a few commercials, including one for Skippy Peanut Butter and an ABC cereal brand.

Spirio said that his passion for theater comes from his desire to express himself. According to Spirio, many people have important topics of conversation to contribute to a public medium, but no one will pay attention unless it’s done artistically.

“If you put it in the form of art, people will suddenly start to listen,” he said. “I think (theater) is the best way to be influential in the world right now.”

Spirio said his dream role would be Billy Flynn from Broadway musical “Chicago.” His favorite roles to play are villains or character acting, and thinks they are “incredibly fun.”

In his free time, Spirio enjoys writing, cooking and dancing.

During his senior year of high school, Spirio and a partner won Colorado’s Got Talent for dancing. The duo were given a pass to be on America’s Got Talent, but did not take it, said Spirio.

If not for acting, Spirio says he would be studying law. He originally planned to study political science but changed his mind after realizing his passion for theatre and arts.

“I naturally have a really storytelling attitude,” he said.

2017-05-01
Previous Post: Establish your leadership style in the workplace, encourage your employees
Next Post: Redesigned FCQ’s goal to solve issues with faculty concerns