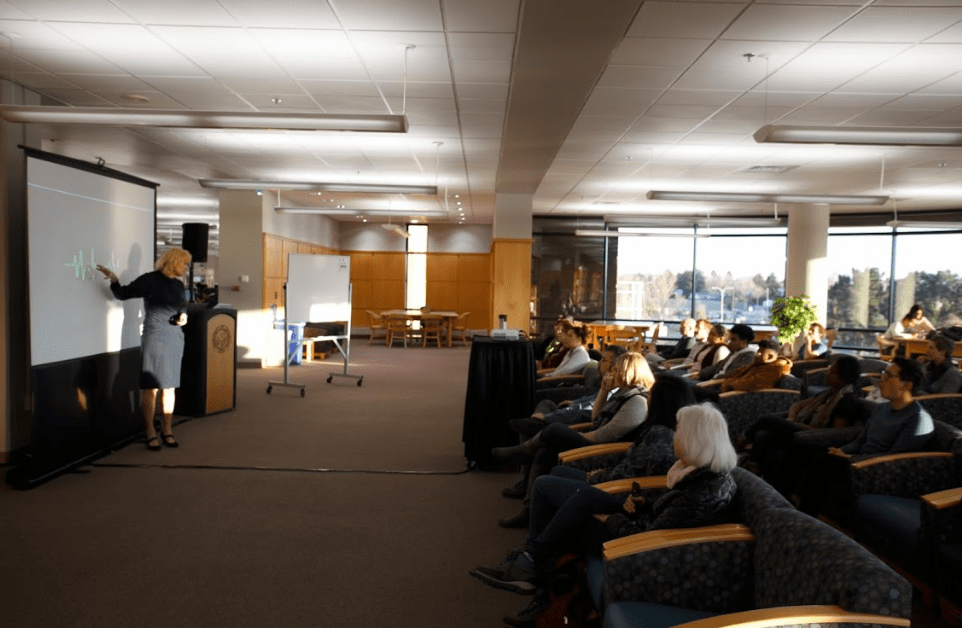 On Thursday, Feb. 7 from 4:30 to 6:00 p.m the Kraemer Family Library presented “Restorative Dialogue: Conversational Skills to Heal Conflict and Harm” as part of their Just Talk programming series. The objective of this discussion was to learn about the best practices when addressing conflict in distinct environments such as on campus or in the workplace.

The speaker of the evening was Kerri L. Quinn, an adjunct professor at UCCS teaching restorative dialogue. Quinn gave an interactive lecture on desirable, undesirable, positive and negative interactions when faced by conflict.

During Quinn’s demonstration she explained the difference between a “power over” and a “power with” relationship when it comes to the interactions individuals have with others.The individual that practices the “power over” interaction with another was described as desiring control. Furthermore, this practice explained the individual as not fully engaged, because instead of listening intently to what the other has to say, they are thinking about the next thing to ask or say.

“What are those people afraid of?” asked Quinn during the talk.

In contrast, the individual who practices “power with” were regarded by Quinn as empathetic and a guide.

To demonstrate these differences, Quinn provided an exercise to the audience. The audience had to select a partner and with that person touch palms.

Once palms were touching, for the first part of the exercise, person A led the hand movement. This showed the controlling relationship of “power over.”

Throughout her talk, Quinn discussed other manners such as the one described above to teach the audience the “impact of conflict” in order to retrieve the ability to produce a “lasting resolution.”

Martin Garner, Dean of the Kraemer family Library, described this event as an “opportunity to have open and honest conversations about issues leaded to equity, diversion and inclusion.”

“To make people feel comfortable talking about things that might be difficult.” said Garner.

The Just Talk nights held on the second floor in the library have been dedicated to provide a space where people from different communities may come together to not only learn from the speaker but also to learn about each other during exercises lead by the speaker.

“Historically and today, libraries are places where all viewpoints are welcomed. Libraries have always been kind of that common space where people can come together and learn more and in this case we are hoping they come together to learn about each other,” said Garner, explaining the motivation behind Just Talk.

“The country is polarized on many issues, it’s hard to find a middle ground,” he said. “Education is about building the world we want to see, campuses are laboratories for how we can model the behavior we hope to see, if we can do it here, when people move on from UCCS, they can take that and model it for the communities they live in.”

Campus expertise from students to faculty, and on occasion community partners of UCCS, are welcome to apply for the volunteer opportunity to speak at a Just Talk event on a topic they are knowledgeable about or driven by.

If you’ve missed this one and are interested in attending future events brought to you by the program, “Just Talk: Body Positivity” will be lead by Dr. Elizabeth Daniels on Monday, Feb. 18 at 4:30 p.m in the library second Floor Apse. All are welcome. For further information on the event visit the Kraemer Family Library UCCS website.