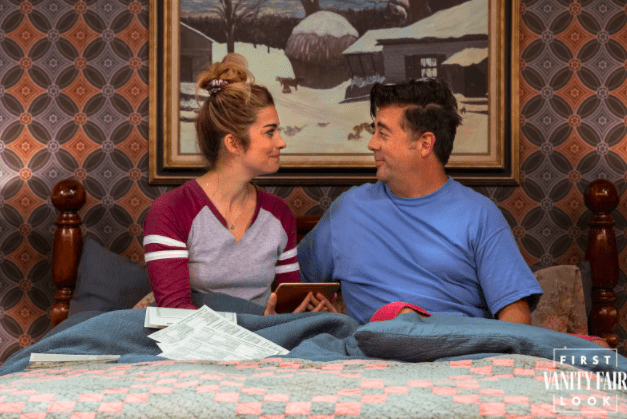 ‘Kevin Can F*** Himself’ promises a deconstruction of the American housewife

Annie Murphy made waves when she hit the big screen with “Schitt’s Creek.” Now, she is generating a social storm in the new show “Kevin Can F*** Himself.”

The show, which is expected to air later this year, is exactly what we needed in terms of fighting the patriarchy and running against the grain of the 20th century housewife character arc.

Based on the recently released trailer for the up-and-coming production, this satire takes many major television sitcoms like “The King of Queens,” “Everybody Loves Raymond” and “Kevin Can Wait” and criticizes them, showing the world that women need not continue to sit back and take the verbal abuse from “funny” men in their lives.

From the trailer, the deconstruction of the modern-day housewife was excellently portrayed by Murphy’s acting. The husband-and-wife relationship is seen through the eyes of the camera and enters into the viewer’s own life by the breaking of the fourth wall. Through this fourth-wall removal, we are able to see what is normally hidden: the wife’s reactions and thought process.

What does the deconstruction of the patriarchy and the housewife look like exactly? It can be seen as the wife doing her chores but having second thoughts and snappy remarks to the husband and the friends. Since this is not normally seen on television this pushes back against the idea that the man is “funny” while he verbally degrades his wife.

With this show being available to the public on the network AMC, the ideas that are being expressed will be seen by different social classes. This is important because the idea of the housewife needs to be analyzed in order to be deconstructed and understood. The transitions that occurred just within the trailer allow the audience to see how detrimental the housewife character arc can be.

The color scheme is important as well and can be analyzed as its own. The shift from bright colors that you would see within a sitcom to the dim darker tones when Murphy is alone with her thoughts was a great way to show the emotional effects of the patriarchal society that we live in.

The audience is moved from nostalgia to revelation, when the music and canned-laugh track drastically switches. The sharpness that is seen and heard is significant because it wakes up the audience at the exact same moment that Murphy’s character is awakened from her false reality.

According to series creator, Valerie Armstrong, in an interview for Entertainment Weekly, “The job of the show is making that wife, that beautiful, put-upon, supposedly naggy wife, a real person. How did that woman actually get stuck in this situation? And how does she get out?”

Women deserve to be seen on television and not as just a set up for the joke.

“Kevin Can F*** Himself” will create a lot of controversy within the realm of gender politics, but that conversation needs to be held. Uncomfortable conversations have to happen in order for change to occur.

This show breaks boundaries and rips through the caution tape that has been set up around this sitcom structure for years. By breaking the rules and being hyperaware of what it means to be a woman, both on television and in life, is something that has never been seen before.

Murphy is not meant to be seen as an actress who is struggling with her coworker; this is meant to be a true deconstruction of the housewife and an escape from the life that too many women are trapped in.

Establishing the fourth wall and having Murphy shatter it to pieces not only allows for a better connection with the audience, but it also allows for the show to do something that has never been seen before: tell the rules of Hollywood to f*** off.

“Kevin Can F*** Himself” will air in summer 2021, and the trailer is available to watch on YouTube.