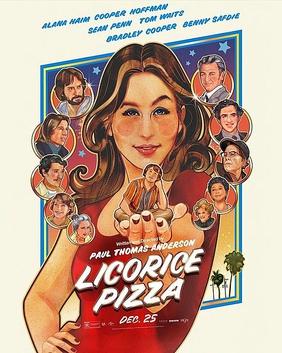 ‘Licorice Pizza’ is the coming-of-age story of the century

“Licorice Pizza” is a film about the messiness of being young. The feelings of not knowing what the future holds. It’s about passion, love and losing yourself in the moment.

Set in 1972 in the San Fernando Valley, the film has a dreamy, nostalgic feel to it. Bright colors pop off the screen while the movie focuses on messy characters.

The film has no plot. The characters just act as if there is no script telling them what to say or do. They live in the moment, making choices for themselves — both good and bad. The plotless film works well due to the two leads of the film, Cooper Hoffman and Alana Haim, who give incredible performances. I couldn’t take my eyes off them, and I am not alone as both were nominated for Golden Globes.

Hoffman is also the son of the late actor Philip Seymour Hoffman, who collaborated with Paul Thomas Anderson, this film’s writer and director, on five of his films.

“Licorice Pizza” opens with 15-year-old Gary Valentine (Hoffman) standing in line at picture day. He notices 25-year-old Alana Kane (Haim), who is working for TinyToes, the company that is doing the pictures.

He hits on her with a confidence and swagger that makes her smile, but she reminds him of her age and his. He offers her dinner. She asks him how he would pay for it. He responds with the laundry list of acting gigs he’s had. They end up at dinner, but she reminds him they are just friends.

Gary is slowly realizing that he is aging out of being a child actor and is searching for new opportunities. He acts like an adult; casting agents, a restaurant owner and other characters in the film act as if he is equal to them. He is also self-centered and immature, mirroring the adults close to him.

Alana is lost in her life. She lives at home with her two older sisters, who are more successful and mature than her. In real life, these actresses are Haim’s real sisters and the trio make up the famous rock group “Haim.” Their parents also portray their on-screen parents, and you can feel the honesty in their family dynamic in every scene.

Alana ends up following Gary after he starts a waterbed business. She later joins a political mayoral campaign to find the meaning that she so desperately wants to find.

Time feels as if it’s running out for everyone. This feeling begins after the national gas shortage destroys their waterbed business. This includes an exhilarating scene where John Peters (Bradley Cooper) frightens the characters while they are delivering one of their final waterbeds to his house. His actions and Gary’s immaturity force Alana to question her place in the world, and how she can make it better.

Anderson is one of my favorite directors. His films range from three-hour ensemble cast melodramas like “Magnolia” to period pieces about narcissistic male characters like “The Master” and “There Will Be Blood.” He even made a romantic comedy with Adam Sandler called “Punch-Drunk Love.”

Despite my love for everything else he’s done, this is my new favorite of his catalogue; I even watched his other movies to finish this review to make sure I wasn’t falling for recency bias. My mind has not changed. The acting, cinematography and character development are all five out of five. It’s that good.

The film has garnered some controversy over the age-difference between the two leads and for a scene where a Japanese restaurant owner does a racist impression of Japanese people in front of his Japanese wife.

I disagree with the controversy, because I don’t see this as a romantic movie between the two leads. It has all the beats to a romantic comedy, but it doesn’t end up that way from my perspective. The film also doesn’t endorse the racism made from the character, nor does it protest it. It does what I am taught to do in my filmmaking classes: Show but don’t tell the audience what is right and wrong. Let them decide.

There was racism in 1972, and there still is today. Depicting something is not the same as endorsing it. At the end of the day, we know it’s wrong because of how uncomfortable it is to watch.

“Licorice Pizza” has an extended theater release and is currently playing at several theaters in Colorado Springs.