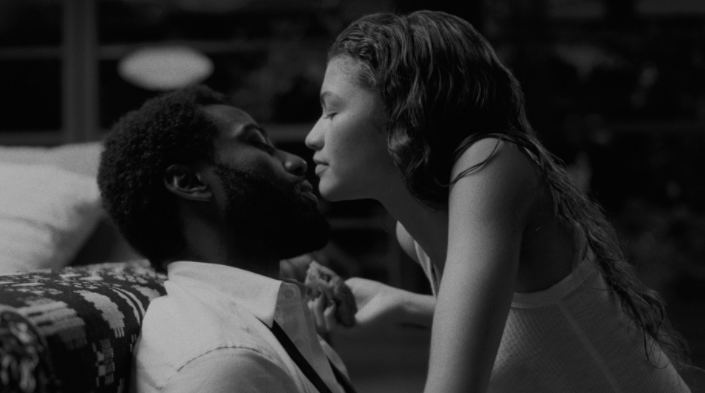 ‘Malcolm & Marie’ is the right conversation at the wrong time

In cinema history, the most satisfying and beautiful moments have resulted from the rambles of lovers in highly emotional and intense circumstances. Conflicts between couples can expose the rotting interior of the relationship, lead to resolution and illustrate the similarities between love and hate.

“Malcolm & Marie,” now available for streaming on Netflix, does not fit into any of those categories of lovers and their quarrels. Described as a film of a couple’s “romantic reckoning,” it evolves into a film of patience.

Malcolm (John David Washington) is a hotheaded writer-director, and Marie (Zendaya) is his girlfriend and muse.

The movie begins with the pair returning from the premiere of Malcolm’s latest project: a realistic and harrowing look into a drug addict’s life that “knocked the audience the f— out,” in the words of a thrilled Malcolm.

He recalls critics fawning over him all night but forgets to thank Marie in his speech. It becomes evident that the film and script Malcolm created is based on Marie’s own life. High off his success, Malcolm does not notice how Marie attempts to slink away.

She tells him, “Nothing productive is going to be said tonight,” and thus their one hour and 48-minute fight begins.

Marie turns out to be right: a slew of monologues and diatribes that go nowhere, the entirety of the film is focused entirely on how the couple run circles around each other, no resolution in sight. Malcolm rants about Marie and her flaws, and then she takes an opportunity to tear him apart. It goes on and on, for the entire length of the film, with the actors’ rapid-fire delivery providing nothing akin to substance.

The film proves itself to not be a romantic reckoning, but rather a waste of talented actors, stunning locations and the uniqueness of black-and-white cinematography. Made during the COVID-19 pandemic with a small crew, the preachiness of the script becomes quickly overwhelming.

Director Sam Levinson, who also created HBO’s “Euphoria,” seems to use the ever-growing conflict between Malcolm and Marie as mouthpieces for his own gripes and complaints. Hidden between the problems with the couple’s romance are problems found within film criticism and identity politics — specifically, Hollywood’s identity politics.

In one scene, Malcolm complains that past filmmakers never seem to have to discuss whether their works had a political message, but he does. He takes another tangent about why authenticity should not matter and how “interpreting reality” is the filmmaker’s job.

An old wound also makes itself present, as he continues to complain about a critic who he calls “the white lady from the L.A. Times,” who gave a negative review on one of Malcolm’s earlier works. Even though her latest review on him is entirely positive, Malcolm bristles at the way she brings up his race in relation to the project.

So, did Levinson know that he would be scrutinized for using a Black character to critique the role that race can play in the reception of a project? If so, his defense mechanism makes itself known in another speech that Malcolm gives, about a film should not be judged “due to an intangible yet purely hypothetical assessment of one’s identity.”

Levinson misuses Washington’s talent by having the actor serve as his shield but also does poorly by Zendaya. Marie, once an aspiring actress, continues to have to talk Malcolm off his soapbox over and over. She acts like a publicist, aware and worried that the pair of them are being watched.

Zendaya’s natural screen presence saves some of the material, her coiled body language and wavering tone indicating more hurt than the dialogue does.

Using a romantic relationship as the framework for interrogating the relationship between artist and critic is not a bad idea and can certainly be remarkable if done correctly. But any passion-fueled tension gets crushed by the obvious debate Levinson seems to be having with himself. The script itself is so self-indulgent, it is a miracle that the actors don’t disappear entirely.

However, that is not to say that Malcolm’s complaints should not be explored in the film industry. Delving into the psyche of Malcolm’s character and the abuse he rains on Marie could have added a valuable piece to the conversation.

As it is, the monotonous back-and-forth between the couple leaves nothing satisfying for the audience, and the conversation becomes lost in a pretentious black-and-white film.

2021-02-10
Previous Post: OPINION: Why I’m getting the COVID-19 vaccine
Next Post: MOSAIC expansion to be completed in March