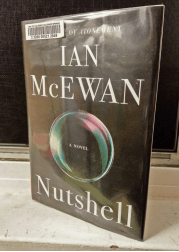 By: Anne Stewart
In: Culture

When I’m looking for an escape, I might choose to read a book about an adventure.

Or I might go for a juicy memoir, ripe with wisdom and enlightenment when I’m looking for inspiration.

The book I choose to read depends on my mood.

And when it comes to the stress of midterms, I just want variety.

Author Ian McEwan’s 17th novel “Nutshell,” a dark comedy, released in September. This book not only gave me the diversion I sought after; it made me think about life existentially.

The book takes place in London where the narrator, a nine-month-old, unborn fetus, overhears its mother Trudy plotting the murder of its father, John.

Yes, the narrator is a fetus.

The story is about characters that surround the narrator. Trudy, the mother of the unborn storyteller, is the focal point of the fetus’s story.

Claude, the narrator’s entertainingly boring and unoriginal uncle, also makes an appearance in the story. Familial ties get more complicated when Claude (John’s brother) is introduced. Trudy, who is separated from John, is having an affair with Claude.

In their shared hatred for her cut-off husband, they plan to do what the fetus cannot believe. He doesn’t know what they plan to do, as he can only hear so much, but he believes he can stop it.

The plot holds the reader the same way the desire for knowledge holds the fetus.

The narrator is one of great intellect and is observant in its situation. I had the vision of someone hearing the contents of an interesting and vivid conversation on the other side of a closed door, putting an ear to it, listening and explaining all that happened in the best way possible.

McEwan’s writing makes the reader see and hear the action within the plot clearly, leaving the reader with the desire to keep turning the page.

Through the fetus’s imaginings and what he has heard of his mother, he (the fetus) allows the reader to see green eyes.

The reader feels like they’re remembering a dream with his description; you know you saw it, and yet, you almost don’t remember what they looked like.

The author has a talent for showing the perspectives in which he writes with such intimacy. The reader is easily drawn into the plot and believes the narrator, which is original.

We know that the author could only do so much research, and the rest was inference and imagination, much like the learning process of the narrator of his book.

One of my favorite aspects of the book was the philosophical ponderings of the narrator. The narrator has so much to learn and experience before birth, and so much to look forward to in life. Even as I read, I smiled at the wisdom conveyed by such a young character.

This connected the reader to the story; it did not endear me to the character as one might think, for this was the mind of an ageless being who longed to know, to see and to feel.

The book was much like “A Tell-Tale Heart” meets “Death at a Funeral,” with comic relief to lighten heavier aspects of humanity. It is a quick read, enjoyable in its lightness and thought provoking.

McEwan’s work is well worth reading, with surprises throughout that lead up to an intriguing ending.

Should students care to give it a go, they may find they appreciate the new perspective that McEwan offers.