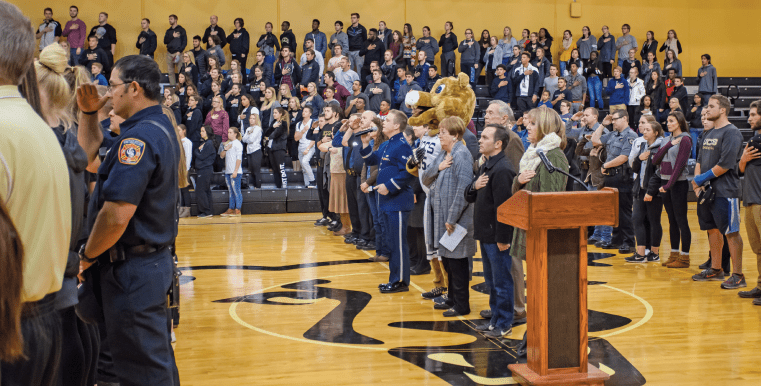 Multiple rows of people stood facing the flags as the national anthem echoed throughout the Gallogly Events Center on Monday night.

Students, staff and the Colorado Springs community gathered to pay tribute to fallen UCCS police officer Garrett Swasey, who was killed in the line of duty in the Planned Parenthood shooting on Nov. 27, 2015.

At the first home game for the men’s basketball game against Colorado College on Nov. 28, Swasey was honored by the UCCS community, first responders and family members in the Gallogly Events Center.

Alpha Sigma Phi, an honor society in the School of Public Affairs honored former officer Swasey with a candlelight vigil before the game at the El Pomar Plaza.

It is a celebration of his life, is what Chancellor Pam Shockley-Zalabak stated at the candlelight vigil and the men’s opening home basketball game a year after the fallen officer’s passing.

Shockley-Zalabak recognized first responders; who mean the world not only to the people in the stands, but to the entire community, she said.

Before the vigil and basketball game opening, MOSAIC hosted a tailgate reception, which was a place for students to build a sense of community and remember Swasey, according to Jake Murphy, OSA Graduate Programming assistant.

Murphy did not attend UCCS at the time of Swasey’s death, but said he was deeply impacted by the shooting.

“It was crazy because I felt as emotionally drained or as affected as I would have if I were a UCCS student,” said Murphy.

“To have a community that I was maybe coming to and joining have such a horrible thing happen made me really sad, even from 1,000 miles away.”

The effect of Swasey’s death still echoes today, according to Anthony Cordova, director of MOSAIC. Cordova knew Swasey in passing, and remembers his presence the most.

“(I remember) his presence in different things,” said Cordova.

Police officers on campus are there to take care of students, and care deeply about the campus population’s wellbeing the most, said Cordova.

“Public safety is there to take care of students, and there are benefits to knowing that is available,” said Cordova.

“It was nice to see how officers were honored,” said Agyei.

Students, staff and visitors who attended the first men’s basketball home game were encouraged to donate to the Officer Garrett Swasey Scholarship by purchasing a #UCCSSTRONG bracelet. More information can be found at giving.cu.edu.

2016-12-03
Previous Post: New club hopes to increase membership, explore psychology through robotics
Next Post: Tarzan: The battle between the book and the movie