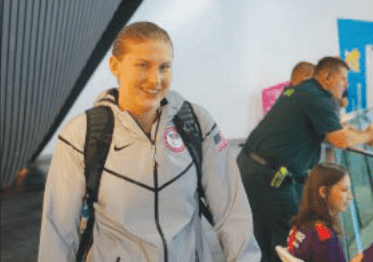 By: Taylor Watters
In: Sports & Recreation

The Olympic City, otherwise known as Colorado Springs, is home to many athletes who train for and compete in the Olympic Games.

Olympic athletes aren’t just training downtown; UCCS is home to some Olympians too.

Scott originally moved to Colorado Springs as a swimmer in preparation for the Paralympic Games in 2008, where she earned a bronze medal in the 400-meter freestyle and was later nominated for Best Female Athlete with a Disability in the ESPY Awards.

“I was blown away by how well Beijing hosted the (Paralympic) games. It was my first games so everything felt kind of magical,” said Scott. “It was really a great experience.”

“I felt very grateful for all of the support I received in London and before London. Paralympics were starting to garner a lot more support in the U.S., so that was a cool way to end my career,” said Scott.

Scott’s career came to a halt when she learned that she needed to have another surgery on her spinal cord to relieve nerve damage from scar tissue from previous operations.

During her recovery, she started to notice more neurological deterioration in her arms and legs and began experiencing shooting pains through her lower back and legs, which led to her decision to end her career.

Scott later became a fellow with the El Pomar Foundation where she directed military affairs, worked on the Empty Stocking Fund and worked closely with awarding grants in Southeast Colorado.

“At El Pomar, I initiated the Team USA Fellowship. It was two years of continuous professional development and leadership training,” Scott said.

“It was a really great time for growth. I think without the experience I wouldn’t have the confidence to be in the role I am in now.”

During her time with the El Pomar Foundation, Scott started attending UCCS to study communication and will graduate in December.

Scott now works at the YMCA where she is helping to implement new Paralympic programming. She is also the assistant Paralympic swimming coach at the Colorado Springs Olympic Training Center.

“(Working with the Paralympic swimming team) is amazing. I did live at the Olympic Training Center for five years, so I know what it is like to be in the athlete’s fins, so to speak,” Scott said.

“It is really rewarding being on the other side of it, because I am reminded of why I love swimming and am passionate about sports.”