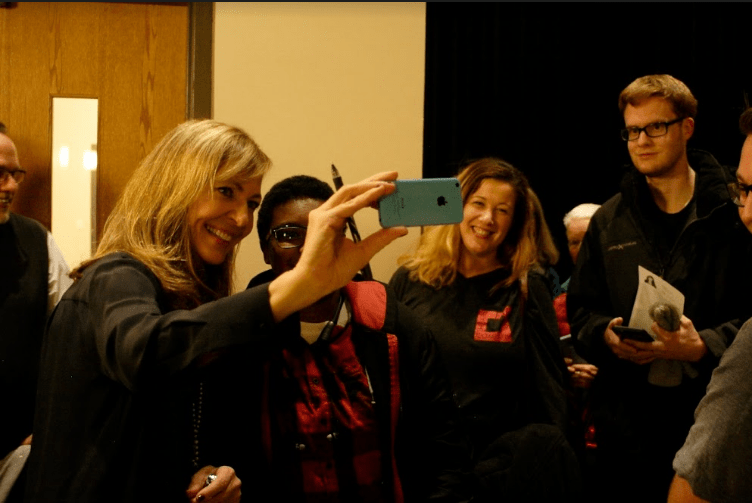 Actress and seven-time Emmy award winner Allison Janney spoke to UCCS students and the Colorado Springs community as part of the theater department’s prologue series on Oct. 12 about her experiences in theater and film.

Kevin Landis, director of the Academic Theatre Program, joined Janney onstage for a Q&A session during the first hour of the event. Landis, who founded the prologue series, asked Janney seven questions about her expansive career.

Janney, who claimed that her big break did not occur until she was 38 years old, discussed her involvement in various Broadway productions and her notable roles in TV and film, including her portrayal of CJ Cregg in “The West Wing,” a late ‘90s American political drama.

More recently, Janney plays Bonnie Plunkett in “Mom,” a 2013 sitcom, and Margaret Scully in “Masters of Sex,” a biographical TV series depicting the lives of two human sexuality researchers in the ‘60s. Janney won two awards for her portrayal as Scully in 2013.

Her inspiration in the business was a focal point of the conversation.

“I feel connected when I’m acting in a way that I don’t when I am just going about my day. I feel good about what I’m doing,” said Janney.

“I always feel a great connection when I get to be someone else.”

Janney had a humble start in theater. Her mother was an actress and her family would travel to Chicago to see her mother’s friend perform in plays, which is how Janney was inspired to pursue acting.

Janney participated in several theater productions during her time as a student at Kenyon College in Ohio. She was cast for a play she auditioned for that was directed by Paul Newman.

Janney met actress Joanne Woodward, who encouraged her to pursue professional theater at the Neighborhood Playhouse in New York. Janney said that she didn’t know anything about theater prior to her time in the two-year program in New York.

“It was a time where you learn a certain technique,” said Janney. “Listening is the key to good acting.”

Giving meaning to the character that an actor decides to portray is also an important aspect of acting, according to Janney.

“You don’t give any meaning to the words; it’s all inside of you. Playwrights don’t like that so much,” said Janney, as the audience laughed.

Janney has starred in several notable plays, including “The Taming of the Shrew” at the Delacorte Theater in Central Park and “A View Without a Bridge” on Broadway. Landis asked Janney about what it was like to perform in these specific productions.

Janney was nervous to perform on Broadway, but the experience was rewarding as she learned what needed to be brought to her role.

“If you don’t have emotion, you feel like you’ve lost a patient on the operating table,” said Janney.

Janney said she took the lessons learned in theater to her film career, which include being on time, teamwork and good work ethic.

Landis focused on Janney’s various television roles in “Mom,” “Masters of Sex,” and “The West Wing” when he asked the actress about her experience in film.

“When I was in college, we would have parties in the dorm watching Cregg in ‘The West Wing,’” said Landis.

Janney said that she fell in love with the characters on the show.

“I love them. They were good people with their heads screwed on right,” said Janney.

Women and young girls alike have approached Janney and told her that Cregg served as a positive role model, inspiring them to switch their major to political science and pursue careers in public service, said Janney.

She was lucky to portray Cregg for seven years, but when Landis asked if she was her character, she emphasized that she was not.

Landis’ last question concerned what words of wisdom Janney would give to aspiring actors. Keep moving forward and do all that you can, said Janney.

“Everything will happen for a reason; don’t rush. Learn to write, direct and be in the moment,” said Janney.

The forum opened to the audience, where six audience members asked Janney questions about her childhood in Ohio, challenges the six-foot tall star has faced with her height, how to balance life as a theater student and what a director looks for when casting.

“Bring your unique self. The more you can bring yourself; that’s what they want to see,” said Janney.