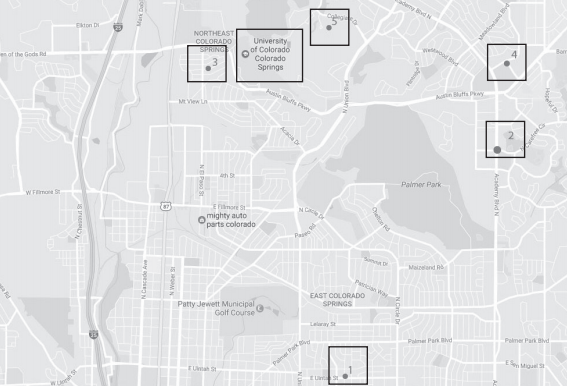 Officers responded to a report of domestic violence and possible kidnapping. The female victim stated that she was threatened by a knife and was denied from exiting the car. During contact with the suspect, Joshua Shankland, officers shot his dog after the dog had lunged twice at the officers.

Shankland was found with drugs and his father, Jeffrey Shankland, 48, was charged with interference after refusing multiple commands not to interfere with his son’s contact with the police.

A driver was turning left onto North Academy Boulevard from eastbound North Carefree Circle, and hit a 41-year-old male wearing dark clothing who walking west in the crosswalk of the intersection. The pedestrian was taken to the hospital with non-life threatening injuries.

Two suspects entered the home of a 60-year-old, wheelchair-bound resident, and stole property, including jewelry the victim was wearing. The victim was not injured during the robbery.

The victim was followed by a black sedan from Austin Bluffs Parkway to the above address, and got out of his car to confront the two male suspects. The passenger of the black sedan revealed a gun, and stole the car. The car was last seen heading northbound on North Academy Boulevard.

A citizen apprehended three juvenile males stealing from his unlocked car. The suspects attempted to steal a handgun, among other items, and were apprehended by the police.

The individuals were later linked to two unreported vehicle thefts and one reported theft. One of the suspects was released to a parent, and the other two were booked into Spring Creek.

Residents in the University Park neighborhood can call 444- 7000 to report a car theft.

2017-04-10
Previous Post: ‘Beauty and the Beast’ remarkable until the last petal falls
Next Post: Swearing makes you seem more honest, open to criticism