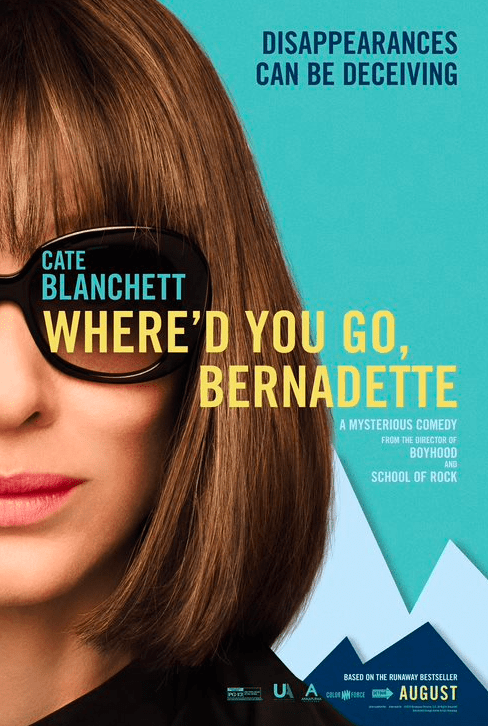 A real enigma of a movie like titular character Bernadette Fox herself, ‘Where’d You Go, Bernadette?’ by famed director Richard Linklater, takes its place as one of the most distinctive films of 2019, but only in terms of its plot. Linklater’s strangely mundane style is almost more enjoyable in the movie’s trailer than on the big screen.

The trailer introduced to the protagonist, Bernadette (Cate Blanchett), whose life has grown stagnant as her hyper-successful past as an architect haunts her and strains her relationship with her family. She is sassy, witty and bitterly antisocial. She runs away, leaving behind her family and boring life in Seattle, to Antarctica (but filmed in Greenland).

Well, this is a wonderful idea for a film if I ever saw one. The movie is based on the novel of the same name, but that should naturally call for a good film. Despite the well-put-together trailer, the film really lacks in providing much more material to live up to its ad.

The visuals are, for the most part, interesting, as Linklater—whose previous projects include ‘The Before Trilogy’ (1995, 2004, 2013), ‘Boyhood’ (2014), and ‘School of Rock’ (2003)—can easily twist mundanity into simplistic yet warm, flowery dialogue and imagery. And Blanchett of course stays about as good as she always is, which is nothing less than fantastic. Unfortunately, her costars cannot reach her level.

Something just ticks differently for this film. There is an absurdity to it. The characters are naturally relatable in their emotions, which contrasts their unrelatable wealth that becomes obvious in the first five minutes of the film when the daughter, Bee (Emma Nelson), almost in high school, effortlessly convinces her parents to take her on a trip to Antarctica.

In case you do not know, trips to Antarctica seem to range from $5,000 per person to $15,000 per person. Well, Bee, most of us merely hoped to be awarded our favorite treats for getting good grades in middle school, so I probably won’t be identifying with your life anytime soon.

At a hefty two-hours and ten-minutes, ‘Bernadette’ does a pretty good job at developing its principal characters. You can thankfully find humanity in everyone who crosses the silver screen, like Audrey (Kristen Wiig), Bernadette’s judgmental neighbor and school-mom, who just cannot seem to catch a break; and of course there is Bernadette’s husband, Elgie Branch (Billy Crudup), who has the worst time trying to crack his wife’s code. But the real question is, will their relationship turn into the typical “unsatisfied-husband-cheats-on-wife-with-secretary” plotline? Keep that in mind.

Aside from the realistic take on character traits (further aside from their upper-class unrelatability), the real question is: “Antarctica?” Yeah, it really is absurd. After comparing the trailer to the actual film, I can tell you there is not much more to the story than what is teased. Bernadette goes to Antarctica to reignite her creativity and jump out of her dry spell, which is, frankly, a pretty cool dream to strive for.

The real mystery, though, is not where Bernadette goes, but rather how she handles her life away from her family. Bernadette takes a heartwarming turn as Bee and Elgie can finally find a way to connect as the only other member of their family goes missing, presumably all the way in Antarctica (as the trailer shows us). Of course, the question remains of Bernadette’s livelihood in Antarctica, and you may be left wondering if, based on the film’s opening, Bernadette is unfortunately eaten alive by a whale.

But you know what? ‘Where’d You Go, Bernadette?’ is worth the watch. It really is heartwarming and, at times, cheesy. If you can choose to ignore the absurdity and just embrace the escapism, then take a trip to the cinema and go see this. Besides, they still need a good $10.5 million to break even in the box office. At the very least, make this one of your pity-viewings.