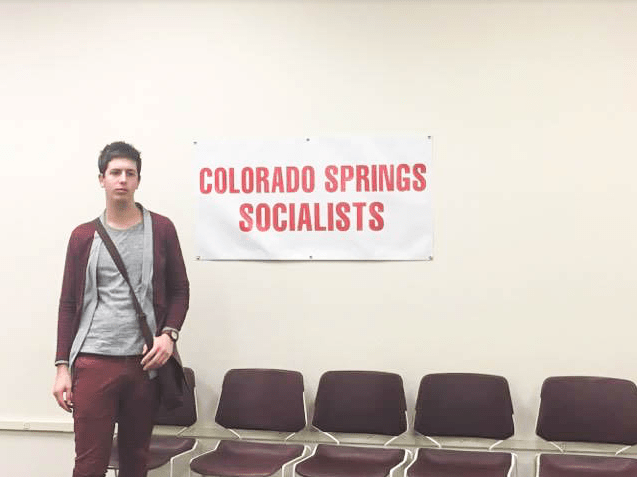 Socialist Discussion Group works to build a coalition of the left, foster dialogue about capitalism

By: Dan McArdle
In: Culture

The Socialist Discussion Group has worked to build a coalition of the political left in Colorado Springs and foster critical dialogue about capitalism since October 2016.

The club’s tactics have attracted students interested in learning about the alternative that Socialism can offer.

The group is made up of eight core student members, 12 non-UCCS students, including local residents, and 23 students who attend one to three meetings, according to junior political science and history major Gabe Palcic, founder of the group.

The group holds a monthly outreach event and two weekly meetings, where the group discusses classical Marxist texts from a syllabus that focuses on a particular ideology each week.

During a two-hour meeting at the Penrose Library on Feb. 5, group members discussed reports on current global affairs.

Following a general discussion of outreach tactics, the group spent the remainder of the meeting working through several texts on fascism by 20th century Marxists, including Leon Trotsky and Antonio Gramsci.

Members related the content to the current political climate. Palcic read a historical account of the violence that plagued rural Italy in the 1920s.

“We can’t just name call. We have to make a distinction between what is and is not ‘fascism’, because that could be fatal,” said Palcic.

“To say that we’re living in a state of proto-fascism right now is probably misguided. The alt-right is not out there summarily executing leftists.”

Lillian House, a Colorado Springs resident, admires how seriously members of the group engage with socialist texts and competing ideologies.

“We all agree that if we are to make any meaningful change to the system we oppose, than we must fully understand it,” she said in an email.

The educational component may make new members feel alienated, according to House. But the education, which has a classical bend, is an important part of the group’s outreach efforts.

“Because we study socialist theory, the meetings can feel very academic sometimes,” she said in an email.

While group members actively participate in political events in the community, they emphasize that education and activism are intimately related and equally necessary, according to senior English major Ryan Hamby.

“Our group is doing a great job of making ourselves known, especially within already left-sympathetic areas of the community,” said Hamby in an email.

“We’ve reached out to a lot of other groups in (Colorado) Springs and Denver, and at least some of us attend almost every protest or event in the area.”

Members discussed the many socialist factions across the U.S. and the need for unity among such groups.

“Until we can unite all of the different parties, people are going to look at these 25 different groups and be turned away, and they’ll wind up with one of these lame liberal reformist groups or just staying home,” said Palcic.

“Our group has diverse viewpoints, but I think we realize that it is more important for there to be solidarity on the left than for us to agree on everything right now,” said Hamby in an email. Palcic said a major goal for the group is to clear up misconceptions about Socialism.

“The Cold War hangover is a big one. Our opinion is that the Soviet Union was state capitalist. It wasn’t a workers’ state. Maybe it was at the beginning, but it quickly degenerated into state capitalism,” he said.

“I had an email after one of the meetings from a guy saying, ‘You know, Hitler was a Socialist,’” said Palcic to group laughter.

Members expressed their convictions about capitalism and the need for radical restructuring.

“I see socialism as the only outcome of the fundamental contradictions of capitalism, and I think that what I believe can make the world a better place,” said Hamby in an email.

“If I found another political philosophy that could offer a better future then I would devote my life to it.”