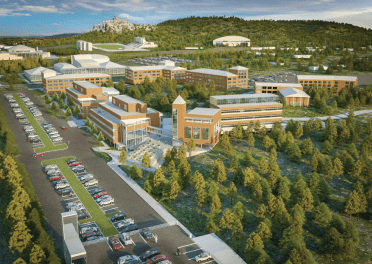 By: Taylor Watters
In: Sports & Recreation

UCCS students who aspire to be in athletic training and exercise science careers are already afforded exclusive opportunities due to UCCS’ proximity to the United States Olympic Committee (USOC).

But students will now have more opportunities to learn real-world applications to their prospective careers.

A functional program plan for the UCCS Sports Medicine and Performance Center was submitted the week of Feb. 27. The plan, which will be reviewed by architectural consultants over the next three weeks, outlines a description of the center, which is part of the City for Champions initiative that has not yet been built.

The center will support academic programs and a space to house local clinicians and research opportunities for faculty and students.

They will turn the current plan into a building program plan with rough estimates of the size and cost, which is expected to cost $27-$31 million.

Once approved by the Board of Regents, another process will take place in June 2017 to select architects and a construction firm for the center.

The team has a year to design the building and approve blueprints. They hope to break ground in 2018, according to Steve Johnson, former president of U.S. Cycling, who is serving as a consultant for the project.

According to the City for Champions Website, the center will open in December 2019.

The facility will house exercise science and athletic training as part of the core academic programs, according to Andrew Subudhi, chair of the Department of Biology. Subhudi and Jackie Berning, chair of Health Sciences, are the visionaries behind the project.

These programs are integral to the center’s mission, which is to “develop nationally recognized programs for the elite athlete, the amateur athlete and individuals who desire to maintain an active and healthy lifestyle,” according to former Chancellor Pamela Shockley-Zalabak in a June 2016 press release.

Other academic programs have not been decided yet, and not every health-related program will be integrated in the facility, according to Subhudi.

Along with the academic programs, students will have a chance to work with local clinicians. The center is partnering with Centura Health and Penrose-St. Francis Health Services to provide a platform for the hospital to run medical-related clinical services.

“It will be the only institution in the country that we know of that has undergraduate students working in the same building as clinicians,” said Subudhi.

The center was constructed to encourage the various clinicians, students and athletes within the facility to exchange ideas that will inspire creativity and innovation, he said.

The collaboration will provide research opportunities for students.

Students will have a chance to experience real-life applications of what they learn in the classroom, including working with high-performing athletes in the Pikes Peak region, according to Subhudi.

The USOC manages these high-performance athletes, although no formal relationship exists with USOC and their training center.

They have developed some relationships with national Governing Bodies and have discussed working with U.S. Paralympics in their athlete performance programs, which is where some of their high-performing athletes will come from.

Certain limitations exist in terms of the number of athletes that the USOC can accommodate in their facility, including a number of local athletes who are not on the funded-access list, and those who the USOC funds to house and train within the organization.

Johnson thinks that the new sports medicine facility will take on a supplemental role within the Olympic Training Center’s functions.

“(The athletes) would like to take advantage of some more sophisticated training opportunities,” said Johnson.

“We can provide that, I think, fairly easily and intend to do so.”