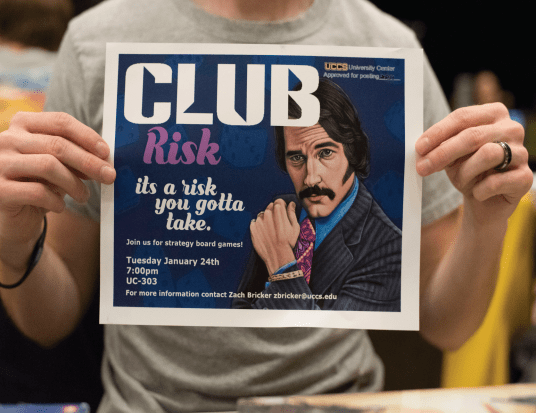 By: Sandy Fales
In: Features

Participation is mandatory in some classes, but for students who want to get involved outside of the stress of having to raise their hand during lecture, over 170 student-driven clubs on campus are waiting to recruit new members.

But, if you do not find a club that fits your interests, you have the option create your own.

The Office of Student Activities held the annual club fair in Berger Hall on Jan. 19. Each semester, OSA allows clubs to submit a request to be included in the club fair. This semester, there were 75 applications for table space submitted.

Among the 75 clubs present at this semester’s fair, 10 were new as of the fall 2016 semester, according to Krystal Schiffelbein, coordinator of Student Clubs, Organizations and Leadership Programming.

Senior philosophy major Hannah Millsap started Project Nur, a student-led national organization that focuses on denying extremism in Islam. Around 50 clubs like this one are located on campuses nationwide, said Millsap.

Millsap was interested in starting Project Nur at UCCS after she attended a lecture last semester on Islamaphobia. The goal of the club is to help make campus a welcoming place for all. The national organization holds conferences each semester, added Millsap.

The Mountain Lions Barbell Club was created during the last week of Fall 2016 semester by nursing major Maria Snyder and sophomore exercise science major Devon Baker. With a lack of college students in their local gym club, Crossfit 719, Snyder and Baker wanted to connect with students who might be interested in joining.

The goal of the club is to find a group of people and get strong together, said club president Snyder. The club is free and meets every Saturday and Sunday from 4-6 p.m. at Crossfit 719, located on 2360 Montabello Square Drive C. Freshman business management major Ariana Kendall loves food. When she came to campus last semester, she noticed that there wasn’t a club dedicated to foodies, so she created Foodies Around the Springs.

Kendall hopes to bring people together in affordable ways to help them connect. The club meets bi-monthly. The first meeting is to discuss the theme of food that month and decide on a place to dine. The second meeting lets members venture out into town and try a new fare.

Biochemistry graduate student Zachary Bricker founded the Risk N’ Roll Club. When Bricker was a freshman, he and his friends played the strategy game Risk. As they moved into off-campus housing, they wanted a way to gather and play.

The club currently has 12 members, and Bricker hopes to have at least 25 by the end of the spring semester. The club meets every other Tuesday on campus.

“The club’s main mission is to provide a relaxing casual night with friends where you can play board games and have fun,” said Bricker.

Several new clubs are created every semester at UCCS. Students can create a club for nearly any cause, and most only ask for a few requirements. To start a club you must have at least four members, two of which are officers. It must be different than other clubs already present on campus, and you need to register your club within the first eight weeks of the semester.

To explore all of the clubs that UCCS has to offer, visit orgsync.com/login/universityof-colorado-colorado-springs.

2017-01-23
Previous Post: Criticism of most privileged mistaken for reverse-discrimination, is necessary
Next Post: Men’s and women’s basketball game progress over winter break