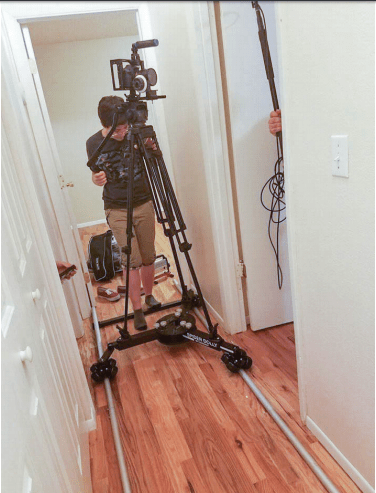 By: Daniel McArdle
In: Features

Art has the power to break down boundaries. In the case of one communication student’s film, art breaks down stereotypes and makes the audience think about those who are different from them in new ways.

Senior CJ Lovato will explore diversity, stereotyping and the ways these issues are transformed into works of art in her senior capstone film project, “Stained Glass.”

“Stained Glass,” which was written, directed and produced by Lovato, follows a young Hispanic woman named Mariana on an uncomfortable first date with a man she met through a mutual friend. But there’s a twist to the seemingly happy premise, according to Lovato.

“Pretty soon, she finds out that he intends to kill her,” she said.

Lovato wrote the script in her screenwriting class to explore her personal frustration with the depiction of Hispanic women in film. She sees the opportunity to incorporate her personal experiences and perspectives into a broader discussion of stereotyping through her film.

“It was kind of just this anger I had toward so often the way Latina or Hispanic women are stigmatized against in dating,” Lovato explained.

“So many guys I’ve dated in high school have dated me just because I’m like a novelty; I’m something they don’t know about. It’s just this perverted view of the culture and it’s disgusting and horrifying.”

According to Lovato, horror, her film’s genre, is a natural vehicle to present her frustrations.

“Horror is very political. These things are actual horrors in the real world of people that don’t often get portrayed that way. This is the horror that I live, and I want to share it with you,” she said.

“Stained Glass” is the first film Lovato has produced from start to finish. According to Lovato, her greatest issue was casting. Several colleagues told her that she should be more lenient with specifically casting actors who were Hispanic, she said.

“I wanted to bring to life a character that was a part of this culture and was empowered by it and not diminished by it as it so often seems we are.”

According to Lovato, this misrepresentation is symptomatic of a lack of diversity in films in general.

“You can tell when you go to a movie and see the audience who the movie was made for. It’s not people like me, (and) it’s not people of color. It’s not queer people; it’s this very white, straight majority,” said Lovato.

The motivation to challenge negative depictions of minority groups comes from Lovato’s view of the responsibilities artists have for the work they bring into the world.

“I think if we want to encourage diversity and create an accurate representation of people in film then we have to take it upon ourselves to do that.”

2017-03-06
Previous Post: Embrace the flaws in your reflection instead of avoiding them
Next Post: Participation, engagement on campus increases freshman retention