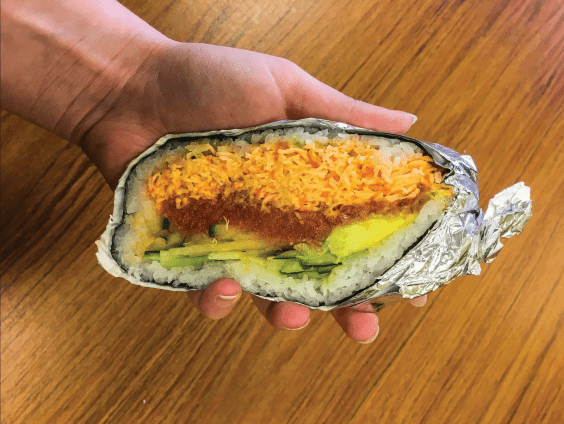 By: Hannah Harvey
In: Culture

“The innovation of man,” I thought in a quiet awe when I saw it for the first time at Buredo in Washington, D.C., and again when I saw it at Sawara Sushi.

The concept was started by Peter Yen, founder of Sushirrito, with locations in the Bay Area, San Francisco and New York. Yen wanted to combine two of the Bay Area’s most popular foods, sushi and burritos, to save on both money and time.

While we don’t have a Sushirrito in Colorado, Sawara Sushi, a Japanese restaurant located in the University Village Center, brought the eclectic dish to Colorado, the first restaurant to do so, according to their menu.

Along with the sushi burrito, the menu contains sushi rolls, teriyaki chicken bowls and catering options for large events.

I opted for the NaDo, which came out to $10.79 after tax. Usually, I’m only privy to California rolls; I’m not the biggest fan of sushi, and my first experience with the burrito in D.C. didn’t impress me.

The price is something you might not like if you’re a college student, and paying $9.99 for a sushi burrito might not be in your limited budget.

But the price is decently comparable to other sushi burrito restaurants. At Buredo, burritos cost between $8.85- $11.75. Still, you might save this for special occasions only.

For the burrito itself, it came with an interesting combination of flavors and amenities to go along with it. I opted for soy sauce and wasabi sauce, but you can choose between other dipping options. The burrito is the size of two rolls, according to Sawara’s menu.

The spicy crab in the NaDo was delicious. It reminded me of a California roll. I typically enjoy spicier foods that have a lot of flavor, and this crab fit the bill.

The spicy crab was the first layer in the burrito, sandwiched in between spicy tuna, rice and nori, the thin sheet of seaweed that envelopes the rice.

The spicy tuna did not impress me as much as the spicy crab though.

Fish is not my favorite thing to eat, so I wasn’t enticed by the idea of eating raw tuna. Upon the first couple of bites, it went well with the spicy crab, but ultimately, it wasn’t a good addition to the mix.

This isn’t because the quality of the fish was poor, but I found I wasn’t excited by the texture of the tuna. I ended up avoiding it as I finished the burrito.

Next to the tuna was a mix of fresh avocado and thinly sliced cucumbers, adding a new layer of texture and flavor that gave the burrito a crisp freshness.

I personally love avocado and always find that this makes a good addition to a sushi roll. The soft texture of the fresh avocado paired well with the spicy tuna.

The cucumber with its crisp and watery flavor added a good texture to the dish as well, adding a slight crunch to the soft crab and tuna meat.

Ultimately, the burrito was tasty and filling, but if you’re a non-sushi lover or a picky eater in general, this may not be the meal for you.

The restaurant is friendly and welcoming; as soon as I walked in three enthusiastic employees greeted me and were prepared to help with anything I might have needed.

The atmosphere of the restaurant is open and welcoming as well, with a variety of areas that customers can eat their rolls and burritos in.

I typically can only handle sushi in small amounts, and this proved to be overwhelming for me.

If you’re willing to try something new, or get your sushi fix on in a big way, try the sushi burrito. But if not, opt for a roll instead.