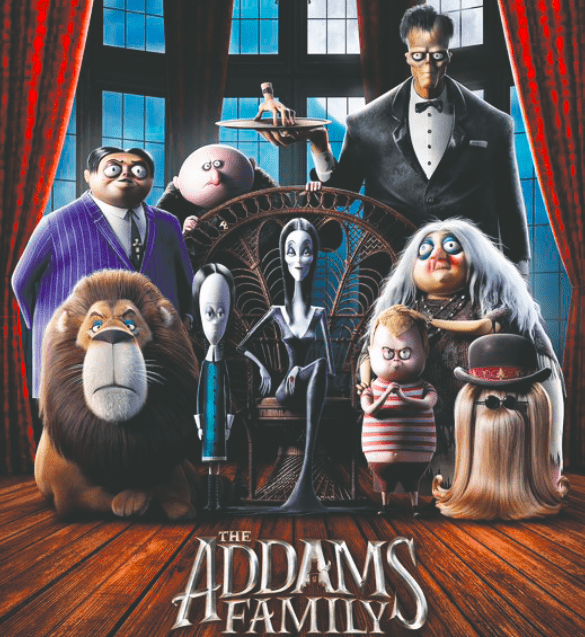 “The Addams Family” animated film takes a beloved decades-old franchise and cynically monetizes it for 2019, albeit with input from devoted Addams admirers.

A crucial trait of every Addams Family incarnation is the rock-solid loyalty and care they show one another. This might be the first version where they actively injure but do not support one another, rather than doing both simultaneously.

There is a clash between the Addams’ dark and gloomy aesthetic and their neighbors’ relentless pastel blandness, but it never feels serious. These are characters to be looked at, not listened to. The “normal” children look far freakier than the freaky Addams kids. The antagonist (Allison Janney) is referred to as “plastic” several times, but her only defining characteristics are her enormous hair and her patterned shirt.

The antagonist is powerless; she never poses a real threat, scary or otherwise. The plot resolution that overcomes her is so rushed as to be unbelievable.

The Addams family members themselves create several conflicts: parent vs. child, husband vs. wife, daughter-in-law vs. mother-in-law; even the extended family fights each other. It feels like a sitcom in the worst sense.

Morticia (Charlize Theron) mistrusts anyone outside her husband’s family, then does nothing but clash with that family. The Addams are all isolated from each other, caught up in their own problems and yet their response is to isolate themselves further from the larger community. This is possibly intended as a modern parable, but it is buried under a blatant moral: accept people who are different from you. Interestingly, that moral is turned on the Addams themselves.

This version of the Addams family is less loving, more distrustful and disconnected. Wednesday (Chloe Grace Moretz) experiences traditional (read: boring) teenage rebellion after a lifetime of being caged – sometimes literally. Pugsley (Finn Wolfhard) cracks under parental pressure due to his father’s fear of his own family.

Gomez (Oscar Isaac) and Morticia are so consumed by their children’s behaviors that they mostly ignore each other, which is possibly the greatest crime this movie could commit. What is the Addams Family but a vehicle for two goth-y people to be passionately, unapologetically in love with each other onscreen? And yet there is barely any romance.

The endless pop culture references drain the film of any remaining juice. Everyone from Mr. Rogers to Pennywise to Snoop Dogg (who plays Cousin It to appeal to the TikTok crowd) is fair game. Some jokes are targeted at the parents or grandparents watching with kids. Many Easter eggs are for the hardcore Addams fans. Too many of the references will date this movie horribly, and it will show in six months.

Even the signature Addams aesthetic cannot save this otherwise underwhelming and forgettable film.