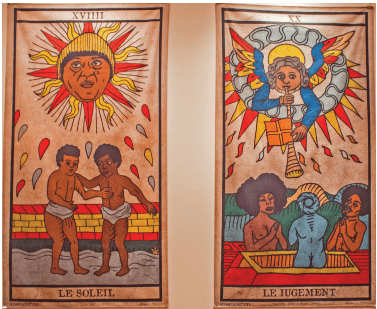 By: Marcy Lopez
In: Uncategorized

Fortune-telling is a fun way for people to speculate about their future lives: career paths, love interests – you name it.

But fortune-telling in the form of tarot can also represent those who influence our culture in impactful ways.

On Jan. 13, the UCCS Galleries of Contemporary Art opened their newest exhibit with tarot card readings, a film screening and artist talks.

The cards include images of 22 musicians, two magicians, a comedian and an activist.

“The Invaders,” a documentary about a 1967 civil rights activist group from Memphis, will also play in the gallery space.

This film follows the activist group, inspired by Malcolm X and Stokely Carmichael, and their involvement with Martin Luther King Jr.

Khan, also known as King Khan, was inspired to create the tarot cards while composing the film score for “The Invaders” after John B. Smith, founder of the activist organization, contacted Khan to help finish the film.

According to Smith, people want to believe that American society has changed since Smith’s time as an activist during the Civil Rights Movement in the ‘60s, despite the continual racism and discrimination, but, in reality, it does not look that different now.

“Young people today face some issues we have faced before,” said Smith.

Surrealist filmmaker Alejandro Jodorowsky Prullansky introduced Khan to tarot cards. After a series of dreams, Khan then decided to craft his own deck wit h the help of Jodorowsky and Michael Eaton, a visual artist for the TV show “Game of Thrones.”

“Tarot has been an important part of my life; they are healing to me. You have a piece of these cards in your soul,” said Khan.

Many iconic black Americans are featured, including singer Eartha Kitt, who sits on a throne holding a sword in one hand and a set of scales in the other on the VIII: La Justice card.

VIII: La Justice represents strength and power with simple painting and limited colors, according to Khan.

“Justice shows us the mother that we all deserve. Eartha Kitt rose from being a homeless child and took the power back,” said Khan.

Other iconic performers are featured on the cards as well. Singer Tina Turner, wearing hoop earrings, a short, tight dress and high heels, stands over a lion on the XI: La Force card.

Turner, a victim of domestic violence, represents the power of taking a risk. The painting has minimal color, but Turner looks fierce and represents strength, courage and determination.

Former rapper Tupac Shakur is depicted on the card labeled XII: Le Pendu. Shakur, with his detailed tattoos and iconic red bandana, hangs upside down from his ankles on the card. In the painting, Tupac is an observer of the world and is trying to see life from a different perspective

“The one who offers the worries of his ego as a sacrifi ce for his inner work, the hanged man is deeply in touch with his spiritual side by not making any choices and momentarily stopping the world,” said Khan.

For more information on the exhibit, visit uccs.edu/goca.