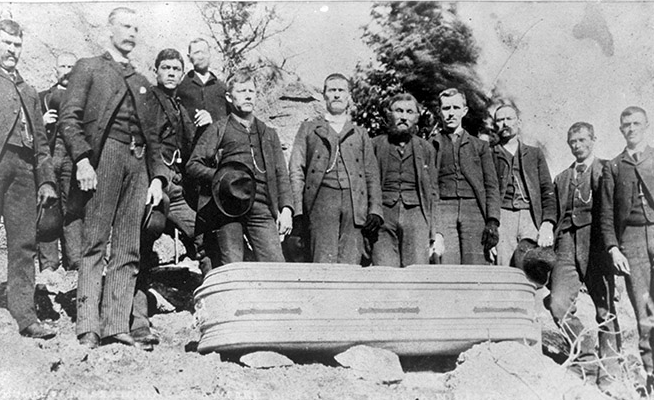 The spooky history behind the Emma Crawford Coffin Races

Manitou Springs is known for its charming shops and locally owned family businesses. This nearby town gives the laid-back impression that all is well, but hiding not far below the surface there is a darker history.

Every year, the town of Manitou Springs gets together, and groups enter the race with homemade coffins on wheels. They then race down the middle of the town. The modern annual coffin races in Manitou Springs commemorate the story of a young woman who lived during the 19th century.

Manitou Springs sits upon the ruins of what used to be Ute Native American tribes’ villages. With that comes the history that people traveling from all over the country tend to overlook because they are too busy staring at the beautiful backdrop scenery of Pikes Peak. In the 1800s, the wealthier people who inhabited this town held native spiritual practices sacred.

Our story begins in 1889, when Emma Crawford and her mother Madame Jeanette Crawford moved to Manitou Springs from Massachusetts. Emma was a talented young musician who was very interested in native spirituality. That interest and a spirit guide led her up Red Mountain, where she found her home in nature.

Emma passed away from tuberculosis on Dec. 4, 1891, and was buried on the side of Red Mountain. With her death came mourning and devastation, as Emma was well known in the community for her musical talents and warm heart. Emma is said to still haunt the now famous Red Mountain. Tourists and locals can hike the same mountain that Emma did when she was a young woman.

Her ghostly spirit can be felt as you walk through the trees and rippling creek water. However, people believe that part of her soul was brought down that infamous night 40 years after her initial burial.

According to local archives, there were two extreme summer storms that uplifted Emma’s shallow grave on the mountain side. She slid all the way down the mountain where her coffin was destroyed and only her skull and name plate remained.

Two young boys, on Aug. 4, 1929, found the skull and brought it to the authorities. Since not much was left of her, and any close relatives were dead or unknown, she was buried in an unmarked grave where her soul was left to unrest.

The guilt that overwhelmed the town, as they knew Emma deserved better, created a yearly tradition to serve her memory, which is now known as the Emma Crawford Coffin Races.

The Emma Crawford Coffin Races were canceled this year due to COVID-19.