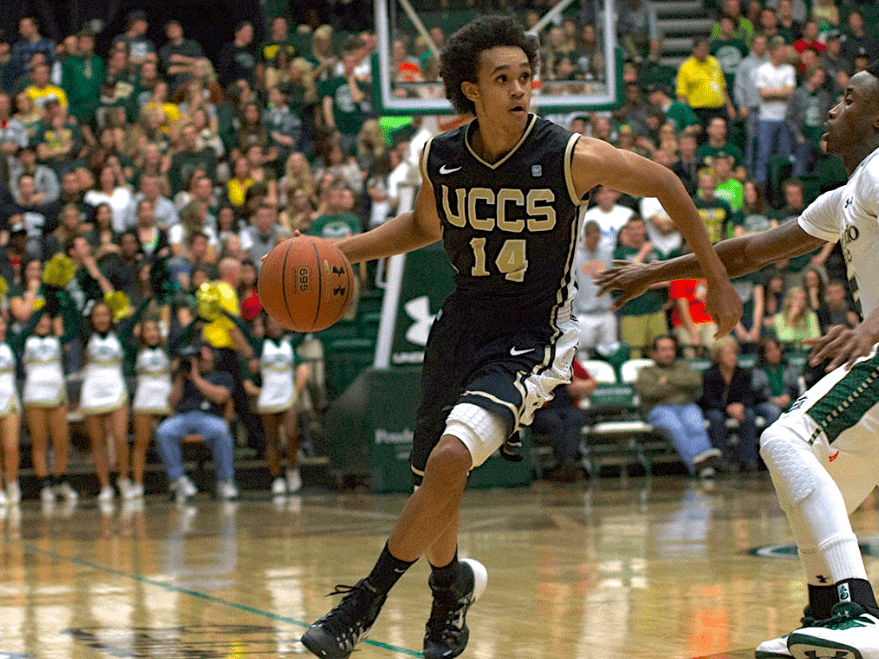 By: Mitchell Quiring
In: Sports & Recreation

After he was chosen as a first-round pick in the NBA draft this summer, UCCS alumnus Derrick White set a milestone in mountain lion history.

White, who played as a guard on the men’s basketball team from 2012-2015, was drafted by the San Antonio Spurs on June 22 in the NBA draft. White is the first athlete from UCCS to play on a national-level team and was the No. 29 overall pick.

“It’s an unreal feeling hearing your name called in the draft and finally reaching a dream that I’ve had since I was a kid,” said White in an email.

Though White hasn’t been apart of the Spurs for long, he looks forward to what’s ahead.

“It’s great to be apart of the Spurs organization,” he said. “They have such great history as a team, and I can’t wait to learn as much as possible from them. Just the overall talent and athleticism is going to be a huge difference, but I’m excited.”

Since being drafted by the Spurs, White spent time playing in the summer league for the team.

“Summer league was a lot of fun. I learned a lot from it and was able to learn from my mistakes. It gave me the chance to learn the system a little bit better,” he said.

White was first recruited by UCCS after he did not receive a Division I scholarship out of high school. He quickly became the star of the men’s basketball team as he helped lead the university to multiple NCAA Division II championships.

“Playing at UCCS was an incredible experience for me,” White said in an email.

“I learned so much while I was there and was able to develop as a player/person.”

After leaving UCCS in 2015, White went on to play on the men’s basketball team at University of Colorado Boulder as a guard during the 2016-17 season. White said that the experience playing at CU Boulder, a Division I school, was different in comparison to UCCS, a Division II school.

“Everyone in Division I basketball was a little bit bigger and stronger, so it took some time to get used to,” he said.

After his single season playing with CU, White displayed his talents and became one of the top prospects in the NBA draft.

According to White, motivation, dedication and constant hard work are what contributes to his talent on the court. White credits Jeff Culver, head coach of men’s basketball, with developing him into the man he is today.

“Coach Culver was an amazing coach, and I wouldn’t be where I am without his influence. He trusted me at an early age and gave me confidence throughout my time at UCCS,” said White.

White has history as a mountain lion that he said he will never forget. The teammates he played with, the coaches he played for and the amazing fans that cheered him on are what powered him to be the athlete he is today, he said.