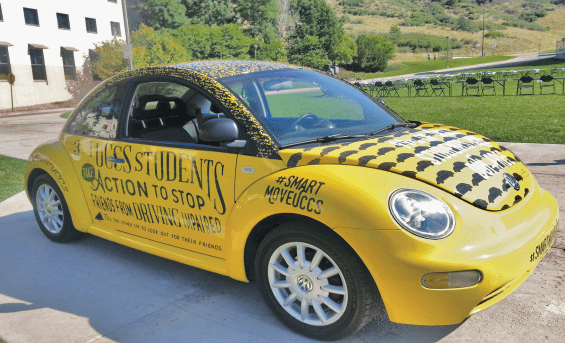 Statistics from a survey revealed that three out of four UCCS students take action to stop friends from driving impaired and that 87 percent of UCCS students believe marijuana makes driving unsafe.

Students may have seen these statistics on a 1960’s yellow VW Bug pictured around campus.

The vehicle, called the Statmobile, serves as part of a new campaign, Smart Move UCCS, which encourages students to make a positive change in their attitudes regarding drunken driving.

Funded by the Persistent Drunk Driver Committee, the campaign launched at UCCS on Aug. 19. The statistics on the car were collected from students in a classroom setting last year, according to Steve Linhart, dean of students.

Gathering this data from the student body was the first step in the “social norming” effort. This campaign project is part of four-year plan, according to Linhart. Now in its second year, UCCS was able to debut the car with the funds from PDDC.

The surveys were given to students in different departments around the campus. Anonymous demographic information was collected for a diverse sample.

The purpose of this was to make sure the statistics would be reflective of the entire student body, according to director of Student Affairs, Amanda Allee.

“If we see that students are sharing the message with each other, we know that it is being received. We really hope it sticks,” said Allee.

The Statmobile will be at large events on campus during the fall and spring semesters, though specific dates have not been released.

Posters of the Statmobile are also on a UCCS shuttle bus and in the Commode Chronicles.

Smart Move UCCS is similar to other campaigns that have been launched on college campuses in Colorado, but this one was made to be relevant to the students at UCCS. This includes the survey, according to Allee.

“‘Smart Move: Drive Home the Message’ is a unique presentation of the message for UCCS.”

Since the campaign is a continuous effort, in the third year of the plan, surveys will be administered again, not only to gather more data from the students, but also to find out how students’ perceptions have changed.

The school will be expected to take full control of the campaign by its fourth year, Linhart explained.

According to Linhart, this operation is different and more extensive than efforts made by UCCS in the past.

“We would like to see students making responsible choices and for them to know that other students are doing the same,” Linhart said.

Linhart and Allee said students retained information conveyed in their GPS courses during Mountain Lion Week, suggesting that the message may already be spreading.

It could be that the message is being retained because of how it connects to students.

For statistics, more information about the campaign or ways to become involved, students can visit uccs.edu/smartmoveuccs.