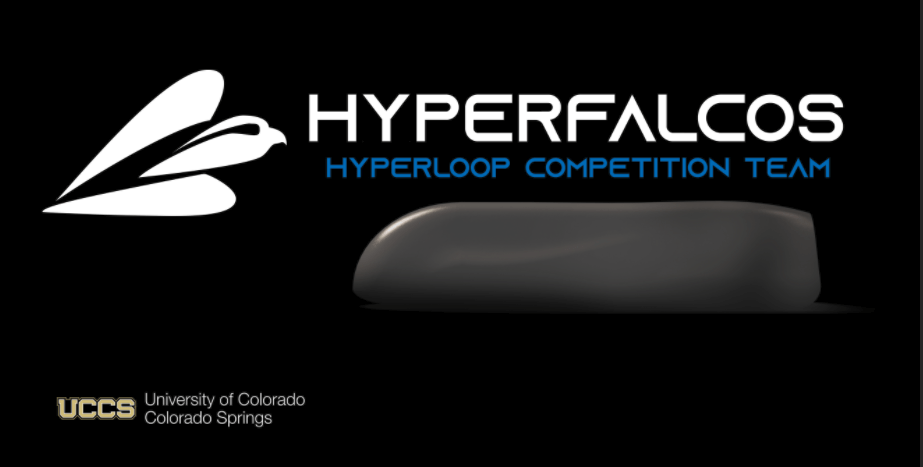 A hyperloop is a new modern form of ground transportation, currently in development by top tech companies like SpaceX and Tesla. A hyperloop pod looks like a hybrid between a train and a giant bullet.

The concept is simple; it moves on a rail system through a system of tunnels and tubes — and it floats. Using this new levitating design, the pod should be better resistant toward air friction, allowing passenger travel up to 750 mph, according to tech enthusiasts and experts alike.

Aidan Westbrook, accounting major and president of the HyperFalcos team at UCCS, believes that hyperloops could be the future of transportation, becoming someday as common and as practical as trains and planes.

The prize in the Hyperloop Pod Competition is less about money and more about notoriety, Westbrook explained in a virtual interview. Victory serves as a method for prospective hyperloop companies to more easily find high quality recruits.

Winners are almost always guaranteed a future job in companies like SpaceX, Tesla and NASA, according to Westbrook.

In the 2016-2018 competitions, the first HyperFalcos pod design consecutively placed in the top 5 percent. In the summer 2019 competition, the team finished in their highest ever tournament placement, placing in the top 25 with their second-generation pod design, but they failed to pass the last trial.

Now, their team is looking to expand. Westbrook said that the team needs new, talented, passionate and dedicated minds to join the HyperFalcos.

Currently, the team has five active members, with some students pending to become fully active.

Westbrook said that due to the nature of the competition, the environment is friendly but challenging.

Cecilia Knight is a sophomore majoring in mechanical engineering and serves as a club officer and mechanical lead for HyperFalcos. Knight added in a separate virtual interview that the team is “doing real research that is impacting the real world that people are paying attention to. Companies, schools, people pay attention to our team. You can make a real change working on this team and build a more sustainable world through transportation.”

Knight and Westbrook believe that with enough advertising — through the club fair, events or word of mouth — students will begin to find an interest and a potential niche on the team.

“We really want to start building events that people can go to. If we just get the word out and post these events for people to see the rail and pod then that would help to recruit,” Knight said.

“You are able to grow so much as a professional and students. There are very few ways you can attain this level of collaboration amongst peers,” Westbrook said.

The team is separated into three sub-divisions that work on separate but connected aspects of the pod. Students should expect to be working in any or all of these sub-teams depending on their strengths and interests. Because of the small size of the team, joining students have the freedom to move and work on any area of the pod.

Westbrook oversees the entire project but is also the business lead. Knight is the mechanical lead, and student Sam Rossilli leads the electrical division.

The business team leads research efforts and organizes various logistical aspects including equipment and event funding, as well as providing adequate resources for the other two sub-divisions.

The mechanical team works on the physical aspects of the hyperloop including but not limited to suspension, braking, power, safety, cooling and propulsion. Electronics, circuitry, coding and power control are left to the electrical unit.

Westbrook praised the team’s hyperloop pod design, stating that there are “no moving parts; the only moving parts are the brakes.” He said that other teams still used a guided wheel system.

Knight added that the pod uses double sided linear induction motors, a unique design which utilizes a beta field to push the pod, like a giant magnet.

Both Knight and Westbrook said that using the double-sided linear induction motors made their design unique from other teams, being frictionless, more reliable, cheaper and safer.

The 2020 competition was canceled, and the current 2021 competition is not a Hyperloop pod competition but a Boring Company tunnel design competition. Knight and Westbrook said that the team cannot participate in this competition due to the limited manpower and resources.

The team is instead working on various other projects at the moment which include smaller-scale events and research for future hyperloop competitions, possibly hosted by SpaceX or by other well-known European tech companies.

The HyperFalcos’ next event is a presentation at the Colorado Space Grant Consortium in April.