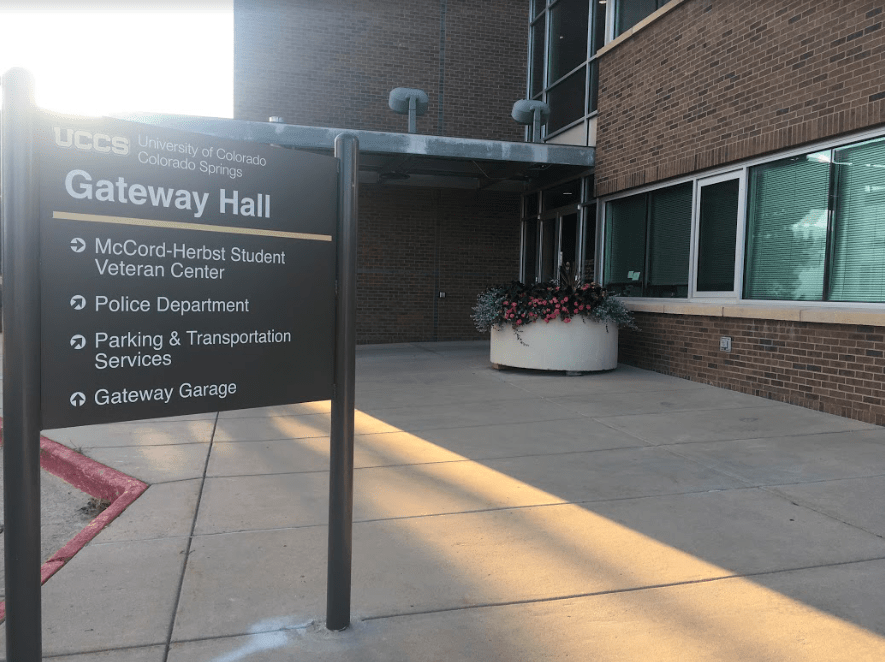 The flyer included a short essay called, “Should Veterans Be Banned From UCCS and Other Universities?” which argued that veterans disrupt learning, understanding, safety and security at four-year universities. The flyer was approved to be distributed by the University Center on public bulletin boards across campus.

“Veterans should be allowed to attend trade schools, or maybe even community college. But, in order to protect our academic institutions, we must ban veterans from four-year-universities,” the flyer reads.

Terry Steinawitz, who authored the piece, is not listed in the UCCS directory as a student or faculty member. The author’s identity, along with the off-campus individual or group who distributed the flier on campus, had not been confirmed at the time of publication.

The purpose if the flyer’s distribution had also not been confirmed by university officials as of Friday evening.

According to UCCS’ Bulletin Board Posting Policy, all bulletin boards on campus, which are located in University Center, Centennial Hall, Columbine Hall, Dwire Hall, the Engineering Building and the Osbourne Center for Science and Engineering, are open for postings by on- or off-campus individuals.

All postings must be approved by the University Center Information Desk; however, the desk does not review the content of the posting.

“The desk does not review the content of materials other to ensure that they contain contact information for the poster and that they conform to size limitations,” reads the policy.

It is unknown whether a group of a similar name called the Social Justice Collective, a branch of the Rocky Mountain Peace and Justice Center located in Boulder, Colo., is associated with the flyer’s contents.

According to the Rocky Mountain Peace and Justice Center, the group aims to incorporate social justice in the Boulder community and provides a space of support for organizations that work for social justice.

The Social Justice Collective was unavailable for comment at the time of publication.

According to junior electrical engineering major Jadon Wilson, the flyer first showed up on benches in Columbine Hall on Tuesday; however, the university has not confirmed the exact date of its posting.

“I didn’t think about it much, but then I went on Facebook early this morning, and I was reading Facebook posts of people really getting upset about it for good reason,” said Wilson.

The Student Veterans Organization (SVO) has organized the Student Veteran Discussion Panel in response to the flyer’s distribution. The panel will take place from 12:30-2:30 p.m. on Aug. 30. The location is to be announced.

The goal of this panel is to address the issues with the flyer’s contents and get the veterans’ viewpoint out to traditional students, according to Tim Little, president of the Student Veterans Organization, which provides support to veterans, military members and their families with resources for their success during their time at UCCS.

“We want people to come and ask us these questions [about the student veteran community],” said Little.

Little believes that the flyer was written by an individual who was trying to gain attention. One section of the flyer argues that veterans have a distracting presence for students, especially those withn the LGBT community, in class.

“I thought that the flier wouldn’t gain too much attention, but it does need to be addressed,” said Little. “It seemed ignorant; people the military fulfill all demographics [including the LGBT community].”

Phillip Morris, program director of the Office of Student Veteran and Military Affairs, received concerns from student veterans who shared the flier through different mediums. Morris believes that the flyer may have been distributed agitate students, some of whom saw the flier posted on Wednesday night.

“We question the legitimacy of the organization; we don’t know if it’s designed to do anything besides agitate people,” said Morris. “I don’t believe the flier is real, but I don’t know that. I don’t know who these people are.”

“I would urge folks to see the flyer for what it is and not respond with vitriol in any way and maintain a strong course for the semester.”

Morris said that he, along with the faculty and staff at UCCS, are extremely proud of veterans on campus.

“Student veterans bring a rich array of experience to the classroom and to the campus,” he said.

Little said that the university has been supportive of the veteran community during this time.

Jesse Perez, LGBT program director of MOSAIC, said that MOSAIC will be supporting the SVO’s panel by helping to choose panelists.

“There’s definitely talks on how do we address this issue,” he said. “From my perspective, things like this are only going to continue to happen, and it’s important that we not be reactive. We should be proactive about these things.”

Perez had not heard any concerns from student veterans in the LGBT community. However, Perez offered support for the Student Veterans Organization from the MOSAIC office.

Chancellor Venkat Reddy released a statement that addressed the contents of the flyer on Friday morning. Reddy said that the flyer does not endorse the flyer’s contents and “vigorously rejects the offensive viewpoints expressed in the flyer.”

However, due to the first amendment’s stipulations on freedom of speech, which UCCS follows, the flyer was allowed on campus. “When speech is a matter of public concern, even though it is racist or sexist, it ‘cannot be restricted simply because it is upsetting or arouses contempt,” said Reddy in his statement.

Reddy pointed out that the viewpoints in the flyer are against the law; according to Reddy, UCCS does not discriminate against veterans, or against those on the basis of race, ethnicity, gender, disability and religion, among other classifications.

“People earn the right to study at UCCS by virtue of hard work and individual effort, and we do not bar the door,” said Reddy.

As for campus safety, Marc Pino, chief of police, said that he did not receive calls from students expressing concern for their safety. There was no threat to campus as a result of the flyer’s posting, according to Pino.

Increased security did not take place on Friday; Pino said the Public Safety took the usual precautions of having a presence on campus in resident halls and other buildings. Public Safety also coordinated with the Office of Institutional Equity to investigate the situation if something did occur.

Joey Vijayam, student body president of the Student Government Association, said that it’s important for SGA to be supportive of student veterans. Vijayam also said that he is also unaware of who distributed the flyers.

“It’s important for SGA to voice support for veterans, while affirming support for free speech and open discussion,” said Vijayam. “What we need as a campus is to support all groups of people.”

Vijayam released an official statement as part of SGA to students via their campus email that addressed the flyer’s contents. Vijayam said that while the university promotes free speech, they denounce “hateful rhetoric” against any student on campus, including student veterans.

“This does not reflect UCCS whatsoever,” said Vijayam in the statement.

“Our veterans make up a large, high-achieving group on campus. Military-affiliated students make up 19% (sic) of the UCCS community, and average a higher GPA than non-veteran students on campus. We are proud of them and what they bring to UCCS.”

For more information on veteran and military services on campus, contact the Office of Veteran and Military Student Affairs, located in McCord-Herbst Veteran Center next to Gateway Garage, at 255-3253 or email [email protected]

2017-08-29
Previous Post: Campus crime: reports of theft, drugs on campus, crime in surrounding area
Next Post: UCCS news: what you missed over the summer