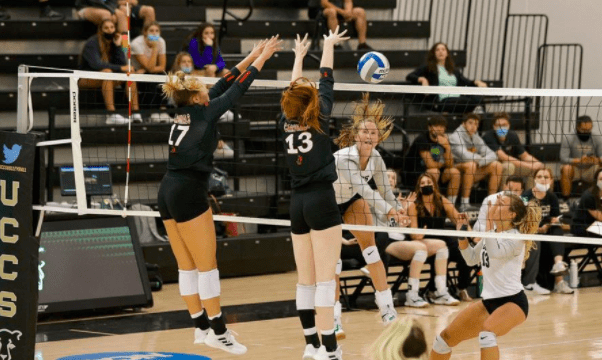 UCCS Volleyball ended last week with two close games, one ending in a win at Adams State and the other in a loss against New Mexico to wrap up the week with a 1-1 record.

On Oct. 1, the volleyball team made their way down to Alamosa to compete against Adams State and attempt to get their first conference win of the season. The game was a back-and-forth offensive battle with Adams State taking the early advantage and winning the opening set 25-20.

Sets two and three were off to a strong start for Mountain Lions, who scored the first two points in both. UCCS then had a burst of energy to send them on an electric 7-1 run, evening the game 1-1.

Starting the fourth set, Adams State was ready to regain the lead and gave a massive defensive push to do so. They held UCCS to a .171 hitting mark with 10 attack errors and 5 blocks by Adams State. This did not stop the Mountain Lions, though.

The teams entered the fifth set tied 2-2 but from this point on it would be all UCCS. The Mountain Lions quickly took control of the game and took a 7-0 lead propelled by redshirt junior Lauryn Shockley.

On Oct. 2, UCCS immediately turned around and went on their way to New Mexico Highlands to play the Cowgirls, anticipating back-to-back wins after their Oct. 1 match. The opening set, which ended with eight ties and two different lead changes, would be the closest and most competitive set of the night.

UCCS was trailing 12-9 and they kept it close. Redshirt junior Hannah Ammerman put down a kill followed by an attack error by the Cowgirls that brought the game within one.

The game continued to go back and forth with both teams pushing to walk away with the win. Later in that set, UCCS was down 24-21, but led by Shockley and junior Madison McIntosh, they brought the Mountain Lions back within one point.

UCCS continued to battle but the Cowgirls maintained momentum and went into the third set with a 5-0 lead. The Mountain Lions attempted to mount a comeback but came up short and lost the game 0-3.

The Mountain Lions will now move to 4-9 on the season. They will prepare to play CSU Pueblo at home on Tuesday, Oct. 5 at 7 p.m. in Gallogly Event Center, and then travel to Denver to play Regis on Friday, Oct. 8.