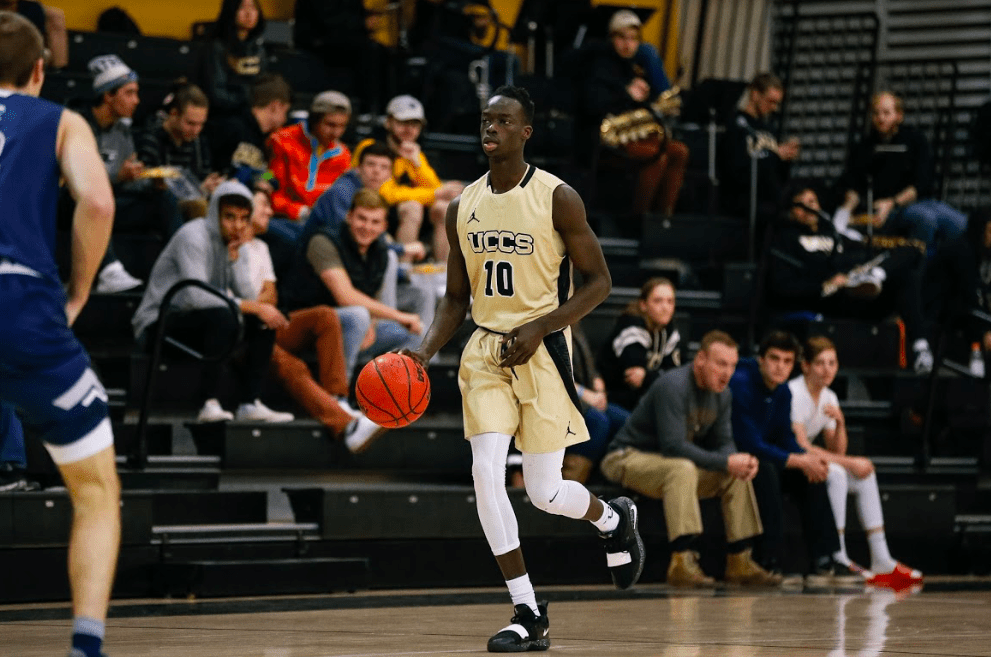 After winning Defensive Player of the Week by the Rocky Mountain Athletic Conference (RMAC) in November, junior account major and guard Padient Wang was chosen on second time on Jan. 7.

“I was honored,” Wang said,“because there’s a lot of great players in this conference. I guess my hard work is just paying off.”

This year is not Wang’s first time receiving honors. In the 2017-18 season, he was given an RMAC Honorable Mention and made the conference All-Academic Honor Roll.

So far in the 2018-19 season, Wang leads the RMAC in total steals, averaging 2.5 per game. He is the second highest scorer for UCCS, so far shooting for 55.3 percent, and one of only two players to have started all games. at the time of press numbering 15. The other player is Brandon Malone, a redshirt senior who also plays guard.

Wang credits these successes to hard work. “Working hard every game, it shows,” he said. Time management has been a part of Wang’s success.

“You got to use your time wisely. It’s a lot of time management,” said Wang. “You get your work done when you have the free time.”

He admitted that it does get a little crazy sometimes, between school, practice, games and life in between. “But down here,” he said, “we’re like a family. We see each other every day, just like another brother. It’s nice down here [at the basketball court].”

It is that brotherly environment that Wang said drew him to UCCS from his home in Aurora. That, and a praiseworthy coach who reportedly “does great things down here.”

Wang credits his brother for inspiring him to play basketball, even as a kid.

“I always played,” Wang said, “you know, just for fun, just around with the kids. But I started playing competitively in middle school, and that’s when I started to really develop my game and get better.”

Wang said he hopes to continue to play basketball competitively, even after college, adding that “the plan is to go overseas. Probably play pro.”

“But if nothing else happens,” he said, “I’ll probably be an accountant.

To those looking to follow a similar path, Wang offered one piece of simple advice: “Keep working.”

“Someone will find you,” he said. “Someone will look at you.Find something that others can’t really do and work on that. Just keep working hard.”

That includes school work too, for as Wang put it, “coaches like people who take care of their school work. Because basketball’s not going to be here forever. You’re not going to have a full career of basketball, so you got to find something else to do.”

But as long as basketball is around, Wang says “enjoy it while you can.”