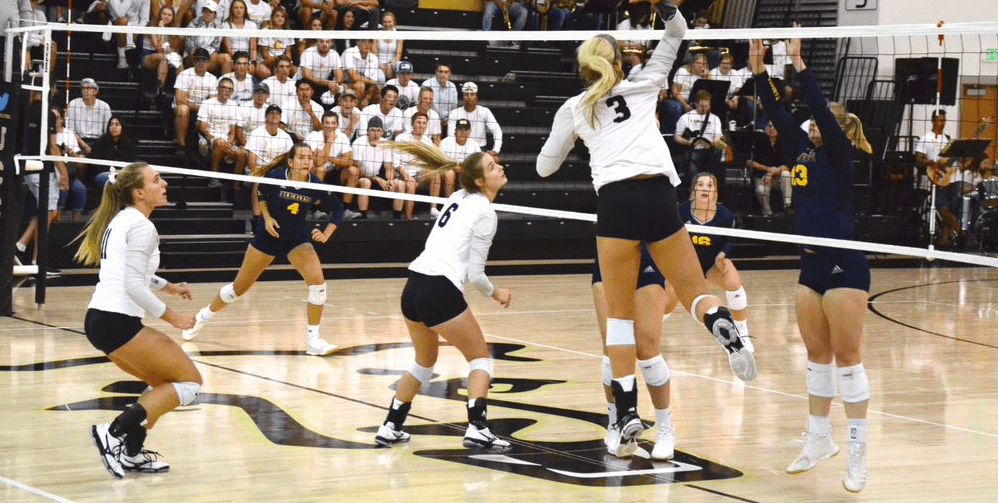 Whiteout Weekend continued the tradition with the UCCS athletic band and a nearly-full student section Friday night, with home supporters decked out in white.

Facing No. 18-ranked Regis University, the game was tied until the Rangers took the fifth set 15-13. Senior middle blocker Lauren Brown lead the defense with seven total blocks of the team’s 11.

The following night, facing Colorado Christian University, the Mountain Lions had a slow start losing the first two sets before coming back to win the next three and the overall match. Redshirt junior Raelynn Edge lead the comeback with 25 assists, with senior Taylor Smith’s 12 kills and Lauren Brown’s 10.

Defensive players Lauren Brown and Jordyn Kinsey also lead the comeback in protecting the net. Brown led the field with seven blocks, and Kinsey led with 21 digs on Saturday night.

Whiteout Weekend came right after the conclusion of the Mountain Lion Invitational tournament, which took place Sept. 12-14, and featured four visiting teams from outside the Rocky Mountain Athletic Conference (RMAC). During that tournament, UCCS went 1-3, winless until the final game against Minot State, where they swept the Beavers three matches to none.

After the Whiteout games, UCCS’s record was at 3-7, and the team stood 1-1 in conference play. This put the team at No. 11 out of 16 in the RMAC. Regis stood at the top, still undefeated at 3-0. Colorado Christian University was ranked last, with an 0-3 conference record.

Going forward from the Whiteout, UCCS looked to continue to gain momentum in RMAC play. The team was on the road through Oct. 1, facing off against Adams State, Fort Lewis, and Colorado School of Mines. Next, UCCS volleyball returns to home action on Oct. 4 against South Dakota School of Mines. That game is scheduled to begin at 7 p.m. in the Gallogly Recreation and Wellness Center.

2019-10-01
Previous Post: Campus Rec hosts trio of intramural leagues and tournaments in October
Next Post: OP: Reasons to get naked this fall