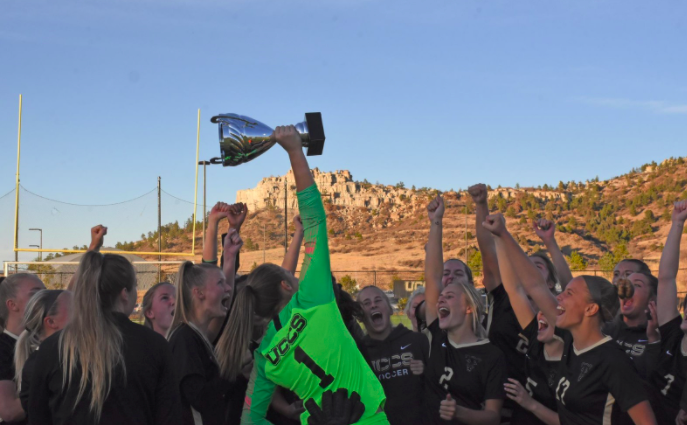 Following the victory on Nov. 15, it was announced that the team clinched the No. 2 seed in the South-Central region in the NCAA Division II tournament.

The Mountain Lions began their RMAC tournament against the Metro State University Roadrunners, a squad that UCCS defeated 2-0 earlier in the season.

Redshirt senior midfielder Ella Fischer netted the only goal of the entire match in the 65th minute from the top of the box to put the Mountain Lions on top. The game ended in a close defensive 1-0 victory.

Following their victory over the Roadrunners, UCCS went up against their first ranked opponent, the Colorado School of Mines Orediggers, who were ranked 20th in the national polls among qualifying teams.

Despite their underdog status, the Mountain Lions outshot the Orediggers 17-11 in their second straight 1-0 victory in the tournament.

After a defensive first half, with only a few shots from both teams reaching the net, it was graduate student midfielder Tarah Patterson who skipped her way through the opposing defense and slotted the ball past the goalkeeper for the deciding goal of the match, moving them to the final championship round of the RMAC tournament.

UCCS started off strong in their championship match against Regis University in the 31st minute, after a ball from Patterson skipped past the Rangers’ defense and found freshman forward Jadyn Ledoux for the opening goal of the contest.

Ledoux continued her solid effort in the second half with a 66th minute strike across the box and into the back of the net for her second goal of the match, only a minute after coming off the bench.

Graduate student forward Bri Johnson gave the Mountain Lions a three-goal lead in the 75th minute with a right-footed shot past the goalkeeper. UCCS held off Regis for the remaining fifteen minutes to win 3-1, capturing the RMAC title and securing their best record of the 21st century: 18-3.

The Mountain Lions, who held a 1-10 record against the Rangers all-time, have now won five consecutive games dating back to 2018, never allowing more than two goals in a single match against them.

Ledoux was awarded the RMAC Tournament’s Most Valuable Player after her two-goal performance and a powerful showing in the tournament’s previous matches.

Including regular season and post-season, the Mountain Lions have won eight consecutive matches, breaking their season-high record. They won 17 of their previous 19 games, the most in over a decade.

This was the Mountain Lions’ first RMAC tournament championship since 2017, a run that saw UCCS make it all the way to the semifinals match and ended with a 2-1 loss to Carson-Newman University.

UCCS will host the match between No. 3 Colorado School of Mines and No. 6 Midwestern State University on Nov. 19 at 1 p.m. The Mountain Lions will play the winner on Nov. 21 at 1 p.m.

2021-11-18
Previous Post: OPINION: Why class attendance should be mandatory
Next Post: Director of student employment addresses wages on campus