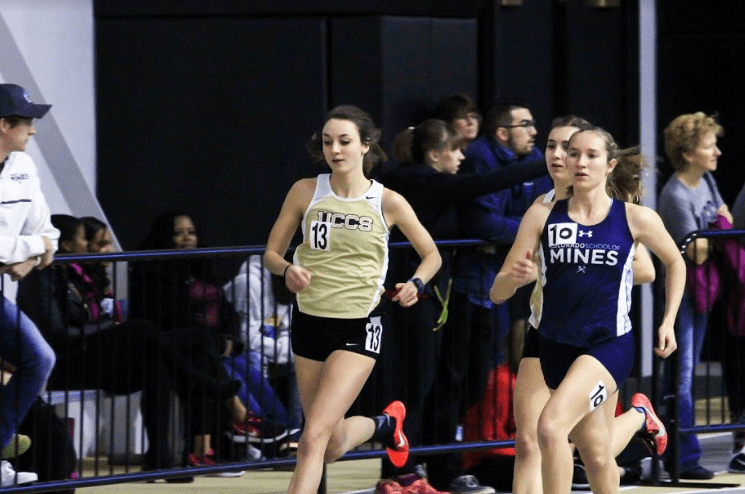 By: Mara Green
In: Sports & Recreation

With a record breaking start to their first season, the women’s indoor track and field teams battled sickness during the end of their season at the Adams State NCAA Qualifier on Feb. 11.

The team is recovering from bronchitis and strep throat so they can finish the indoor season strong, according to Ross Fellows, co-head coach.

The team, which is made up mostly of freshman athletes, has been competing at a high level; they hope to be placed in the top five during the RMAC conference, said co-head coach Brandon Masters.

“It’s just a matter of getting them fit and ready to go in the next two weeks. We trained through most of the indoor season in order to be ready to go at our best when it counts, and that is conference championships,” he said.

“We believe if we have a good meet and have our best performances at the right time that we will be right there.”

Setting the goal of placing in the top five in their first year is difficult considering the majority of the conference competition is nationally ranked, said Fellows.

The team has started to shift their training style with the RMAC Championships on Feb. 24-25 in Spearfish, S.D., and March 10-11 in Birmingham, Ala., according to Fellows.

The coaches have heightened the intensity of practices but decreased the volume, allowing speeds to get faster and athletes to hit their peaks.

“They are ladies that would be considered leaders that should be on the nationals list and have an opportunity to score some points at nationals as well,” said Masters.

“(We want to) take a number of kids to the national meet and get on the podium and be competitive there, and kind of open some eyes on the national level as well,” said Fellows.

Having a young team means that only a few of the athletes have experienced an indoor season. Going outside is the kind of track and field that athletes are used to, according to Masters, who said that there will be a few additional events that better suit outdoor competitions, including discus and javelin.

“We have a few people that could be on the national list in both of those events (discus and javelin),” said Fellows.

The team will compete at the Joe Davies Classic, which will be held at the Colorado School of Mines Steinhauer Fieldhouse Feb. 17 to 18.

Following this event, the team will compete in the RMAC Championships. These events will act as a transition into the outdoor season, which starts March 25.

“We feel like we will have a good shot at putting up some good numbers at these events,” said Masters.

“We still want to win indoors, but when we transition into outdoor (competitions) – that is what track and field is all about.”