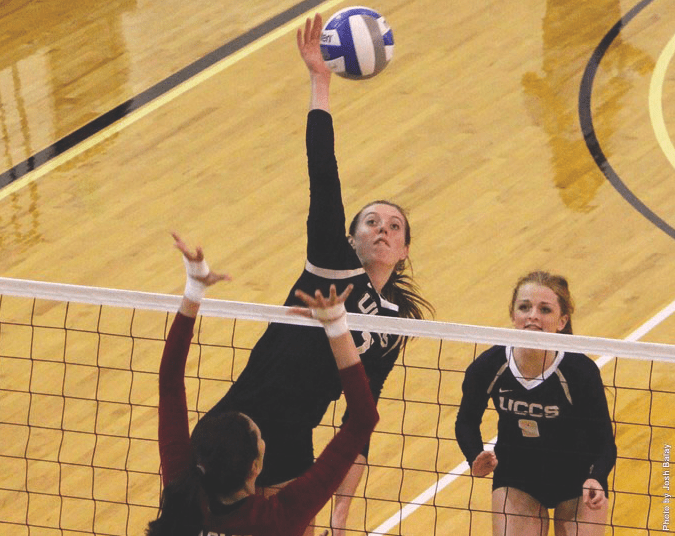 By: Mitchell Quiring
In: Sports & Recreation

UCCS’ women’s volleyball team will set their sights on the RMAC championship this  season. Teamwork and learning from their strategies last season will help them achieve their goals.

The mountain lions ended last season in a tie for third with Regis University, ultimately taking them out of the race for regionals. For some of the players, barely missing regionals only gave them more determination to make it to the championship.

The team ended with an 18-10 overall record, winning the majority of their matches. The team lost 1-3 to Colorado Mines in the RMAC Semifinals last November.

“We ended on some good games last year,” said senior middle blocker Taylor Hamilton. “It was a good motivator for us to go into.”

With the season already underway, the team has competed in the Hawai’I Challenge, losing 2-3 in their match against Seattle Pacific on Aug. 31.

The team will play against Chadron State in Nebraska on Sept. 15.

One of the most important games in the tournament was against Texas A&M Commerce, a school that is apart of the same region, according to Hamilton.

“These games are really important to us because it helps us know where we are and what we need to work on. It’s a good opportunity to learn a little bit about yourself and the team as a whole.”

“Chemistry is everything. Even though it’s our last season, it’s important to us to connect with our newer teammates and have them apart of our lives,” she said.

Hamilton credits head coach Chrissy Elder, who has been apart of the coaching staff since 2007, for the development of the team over the years. According to Hamilton, Elder’s leadership has created a strong bonds between players, and a powerful work ethic within the team.

“She really helped place our focus into our end goal. She has taught me how to work hard on and off the court. She is someone I can go to for anything,” said Hamilton.

Newer players also reflected on their experience in building teamwork. Going into her second season, sophomore libero Aly Morgan was both excited and nervous about playing on a collegiate team.

“For freshmen, it’s always intimidating as you go into it, but you can’t let that get in the way. When it comes down to it, you have to put it all out on the floor,” said Morgan.

Going into her second year, she has shed her fear but instead looks at it enthusiastically. According to Morgan, new freshman players have high potential.

“I’m really excited for this year, I’m not scared at all,” she said.

“Usually you can see when players let the nerves get to them, but I’ve seen every single one of them work hard and I can tell that they care.”

For more information on the women’s volleyball team or upcoming games, visit gomountainlions.com.