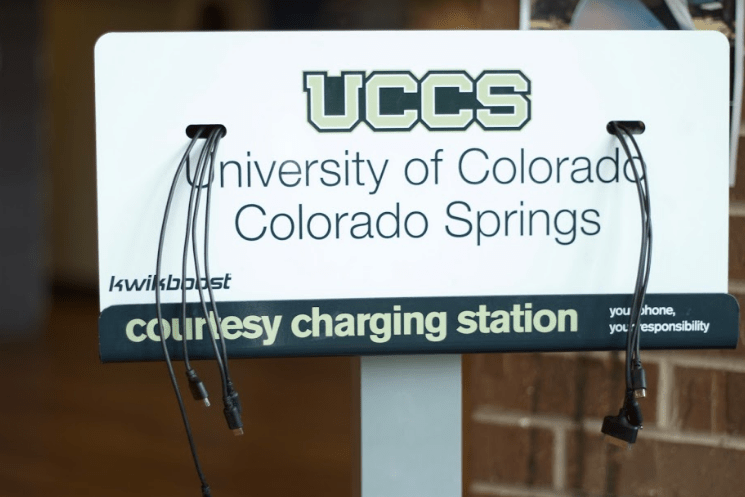 Additional phone charging stations to be added on campus

For a student, watching the battery life drain out of their beloved smart phone can be like a form of slow, first-world torture.

The Student Government Association is looking to expand the number of charging stations available to students after the installation in locations like the University Center help desk and the Columbine coffee shop last year.

Senate Bill-19, the bill to add additional stations, passed Feb. 16 at the SGA Senate meeting. The stations are expected to arrive on campus in the next couple of weeks, according to Shawn Hendrickson, senator at large and speaker pro tempore.

SGA will allocate $3,969 for five more charging stations, which will be placed in various locations on campus, including the Communication and Math Excel Centers, along with other areas, said Hendrickson.

“Right now we are thinking about (installing them in) Clyde’s, the Osborne building is going to be a big one, and (University Hall), depending on where students congregate around them,” he said.

Hendrickson also added that using a different model of the chargers, such as one with wirefree charging, was a possibility in the near future, if students are receptive to it.

He said the simplest way to request a charging station is to contact SGA.

“One of the students in the communication center reached out to me to get a charging station out there,” Hendrickson said. “We took the opportunity to really branch out the program.”

The stations were proposed last year by former senator Kimia Ahmadian and have received positive feedback, according to Hendrickson.

“Originally, (Ahmadian) wanted to have 12 charging stations around campus, and it was talked down to about eight,” he said.

Theft was an initial concern of placing charging stations out for use around campus, where phones might be within the immediate reach of students, but so far there haven’t been any problems.

“Students are pretty nice about leaving their phones, but keeping an eye on it. We don’t expect it to get out of hand any time soon,” Hendrickson said.

“I always think they are kind of funny because you’re so publicly charging your phone, but I always see people using them, so they must be useful,” said Enger.

“I do think they should put more of them around campus,” added Koumis.

2017-02-26
Previous Post: ‘Lego Batman’ delights both kids and adults with quirky humor
Next Post: Photo updates, developments at the Ent Center for the Arts, to finish in 2018