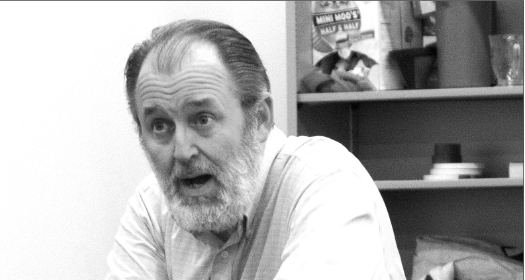 Theatreworks’ “An Iliad,” directed by Max Shulman, tells Homer’s classic tale of the battlefield with gods, dereos, and empires, reinvented for the modern era.

According to UCCS Presents, the play will consist of two cast members, Erik Sandvold as the Poet and Jane Chan as the Muse.

Director Max Shulman, assistant professor in UCCS’ theatre and dance program, went to Northwestern University for his undergrad and gained his PhD in theatre history at Tufts University. “I like to think of myself as, I guess, a scholar with a professional practice,” he said.

“An Iliad” will be Shulman’s first time directing for Theatreworks.

According to Shulman, the play is technically a one-man show. Although there is another actor onstage, Sandvold is the only one with lines. The other person onstage is Chan, a cellist who plays the Muse. “I am always a little nervous, a little more excited than I am nervous,“ Shulman said. “I think this script is incredible. It explores what is essential about the theater. A person in front of you telling a really wonderful story.”

Like any professor, Shulman has a lot of research and writing to do. His plan is to keep working with his students, all-the-while directing “An Iliad.”

“In 100 minutes, you get the entire story of the Iliad. Not polite, not old, not rusty, but instead incredibly vibrant and violent with all the bloody details of a war story,” Shulman said.

Sandvold described his character in one word: “storyteller.”

He said, “[the poet] has seen, or imagined that he has seen, every single war in human history. So, he is a compendium of war, mandated by the gods to keep telling this tale until mankind finally puts an end to war.”

Sandvold provided a quote from his character, who says, “Every time I tell this tale, I hope it is the last time.”

Sandvold has played in several one-person shows, helping him understand the hard work and dedication that goes into shows like “An Iliad.”

Rehearsals have been going very well, according to Sandvold.

He explained a very coincidental connection with the co-writer of the play, Denis O’Hare. O’Hare, Shulman and Sandvold all went to Northwestern University, where they were taught by acting teacher David Downs.

“I really think that the play is a very worthwhile play, especially with this community with a lot of people in the military or people that have been affected by war,” Sandvold said.

He feels strongly about the play and thinks that people will be glad to attend. UCCS Presents gives a content advisory for the discussion of conflict and battle.

“An Iliad” will be performed at the UCCS Cybersecurity building, located at 3650 N. Nevada Ave., from March 12-29. For tickets, call the box office at 719-255-3232 or visit the Ent Center. Tickets are free for students. Faculty and staff get discount tickets.