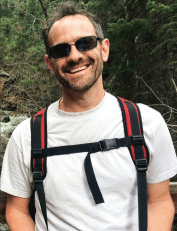 By: Dan McArdle
In: Features

After graduation, many students move back home or start their life in another location, but some students eventually make their way back to their alma mater.

Communication lecturer Matthew Morgan began his career as an undergraduate student at UCCS.

The Colorado Springs native has taught classes like COMM 2250: Intro to Film and Video at UCCS since 2011.

Since his time at UCCS, Morgan has created award-winning documentaries, promotional spots for companies and charities and a growing business called Post Interactive, a local film production company that he started with partner Trina Bivens in 2009.

The company offers a variety of services to clients and produces original work across multiple genres. Post Interactive mostly does commercial advertising work, although they’ve worked with several nonprofits and produced documentaries, according to Morgan.

Their documentary, “Breaking Through: Memories of the Tuskegee Airmen,” won the highest honor at the 2012 Lifetree Film Festival.

But Morgan’s favorite project with Post Interactive has been a collaboration with Chuck Zukowski, a Colorado-based paranormal investigator who Morgan met by accident.

Together, Morgan and Zukowski achieved two-year and four-year goals to bring awareness to Zukowski’s work, something that Morgan is proud of.

“Chuck has tremendous skill and dedication for what he does. I have a lot of pride that we’ve helped him get there, and I’ve made a lifelong friend.”

After taking the introductory film course at UCCS as a student, Morgan developed a passion for storytelling and post-production editing. Following two formative elective film courses at UCCS, he decided to pursue film as a career and transferred to the University of Colorado Boulder’s film studies program.

“With no family or friends in the field, I knew I wanted as much education as I could get to break into the industry,” said Morgan.

After graduating from CU Boulder with a Bachelor’s in film studies in 1998, Morgan continued to the University of Texas at Austin to gain experience with the technical aspects of his craft.

While completing a B.S. in radio-television-film production, Morgan decided to focus on post-production editing and took his first internship in the industry.

After, he moved to Los Angeles where he spent six months working unpaid nights and weekends so he could be on set. The graduate accepted a job in an audio production facility, even though it wasn’t what he aimed to work in.

“I understood then that you have to ingratiate yourself to make the connections that you’ll need moving forward,” he said.

“I thought, ‘hey, it’s a job that’s being offered to me, and it’s in an area that’s severely overlooked.’”

The choice paid off, but Morgan decided to leave after a year due to the job being unsatisfying.

“I went to the owner of the company and told him what I wanted to do. It really was a big risk to take and it could have cost me my first real job in the industry,” said Morgan.

Luckily, a neighbor of his was looking for an assistant editor, and his boss happily referred him.

Morgan worked between three companies producing commercials for major broadcast networks in his new position. The job created the opportunity for Morgan to diversify his experience in order to be an industry professional, he said.

Morgan’s career goals include expanding Post Interactive, producing more documentaries and continuing his teaching career. Morgan’s teaching is motivated by an appreciation for the mentorships he received, and he stands by the advice and long odds he embraced.

“I want to support young people today who have that same passion. The goal of an educator is to help bring people along.”