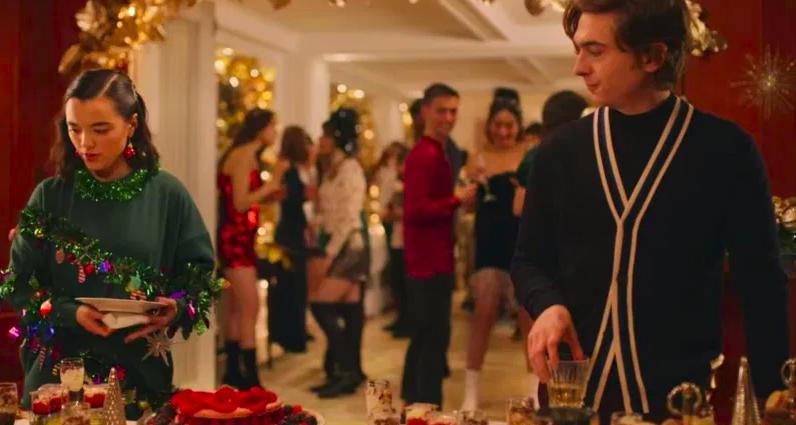 ‘Dash and Lily’ is a must-binge this holiday season

Netflix recently released a new show called “Dash and Lily,” which tells the story of two teens in New York City finding each other during the most wonderful time of the year … Christmas.

While this plot provides an opportunity for another tasteless teen trope, it actually mixes together original characters and Christmas to create a must-binge, heartwarming story, which is excellent for the holiday season.

When I sat down in front of my TV and turned on Netflix, I didn’t expect to press play on Episode 1 and end up finishing the entire season in one sitting. But here I am, exposing myself and my entire day to all of UCCS. The fact of the matter is that I love Christmas, and when I find a good Christmas show, I have to finish it!

The first episode had my attention within the first ten minutes when title character Dash (Austin Abrams) walked into a bookstore and found a red notebook with a set of riddles. I knew it would be fun to solve the mystery with him; I wanted to know who the author was as much as him.

But when Dash and co-protagonist Lily (Midori Francis) start to exchange adventures and riddles with each other through the same notebook, my heart began to melt into a gooey mess. This was more than a mystery. This was young love, blooming in the heart of New York during the most magical time of year.

My Christmas obsessed mind was hooked.

Possibly the best part of the entire season, and definitely the bones of the story, were the characters and their development.

Lily is perfect! Finally, a character in a teen show who is actually relatable. She is a little bit weird, and a fellow book and Christmas lover.

More often, with stories like these, you see the same love-obsessed girl who spends the entirety of the plot falling for the wrong guy when her true love was really her best friend. Oh, and let’s not forget that it all takes place between first and second period, in front of the high school lockers, with no teachers to be found. But not “Dash and Lily.”

The plot in general takes place over Christmas break, so no cliché high school is in sight, and to appeal to my own obsessions even further, it’s also set in New York. It is even mentioned in the first episode that all of the best stories take place in New York City, and I could not agree more.

However, Episode 7 revealed to me that these thoughts were completely wrong. I was quite literally misled! Bamboozled! Usually, I can see these things coming, but something, maybe the Christmas lights, blurred my ability to see past the plot to predict what would happen next.

The plot fed me the storyline that I wanted, and I willingly ate it all up. Although, some part of me tells me that that would not really happen in real life. But alas, Christmas cheer made me turn a blind eye.

I tend to laugh only at the most wholesome and purely happy moments … “Dash and Lily” provided me with the warmest laughs. When Dash finally created the perfect mochi ball, and all the ladies around the table witnessed that small accomplishment, they all clapped, and Dash smiled.

What sells a show to me is not in the theatrics or casting, but in small scenes like this, where the plot, acting and script can all work together to create real moments that audiences can truly feel.

I laughed when I saw Dash smile at his success. I also know how incredibly hard it is to make mochi, so I suppose I felt his accomplishment like it was my own.

Along with all of this happiness is a respectable amount of drama, provided by Dash’s ex and Lily’s old-enemy-turned-first-kiss, Edgar. The only part I disliked in the entire show was watching her kiss Edgar, rather drunkenly. Something about it made me feel uncomfortable, although I was thankful for that to be the exact moment Dash popped up to finally reveal himself to Lily. Maybe, this part was unnecessary, although it helped the story along in the long run.

An additional selling point to me was the allusion to all of my favorite childhood stories such as “The Lion, the Witch, and the Wardrobe,” “Alice in Wonderland” and “Cinderella.” This show was candy for me, and I couldn’t help but get high on the sugar.

The happiness, the soft originality in Lily and the plot, the references, Christmas, love and all the warmth I could have asked for! Name something from the entire show that I didn’t like, and I swear I could come up with an excuse for it.

Overall, I recommend a weekend binge of “Dash and Lily” to anyone in the UCCS community. The simple and warm feelings that can be gained from this show make it a mandatory watch, especially during a time that doesn’t quite feel simple or warm.

2020-11-30
Previous Post: Coping with the world we live in without using or abusing substances
Next Post: Photospread: Arizona in November