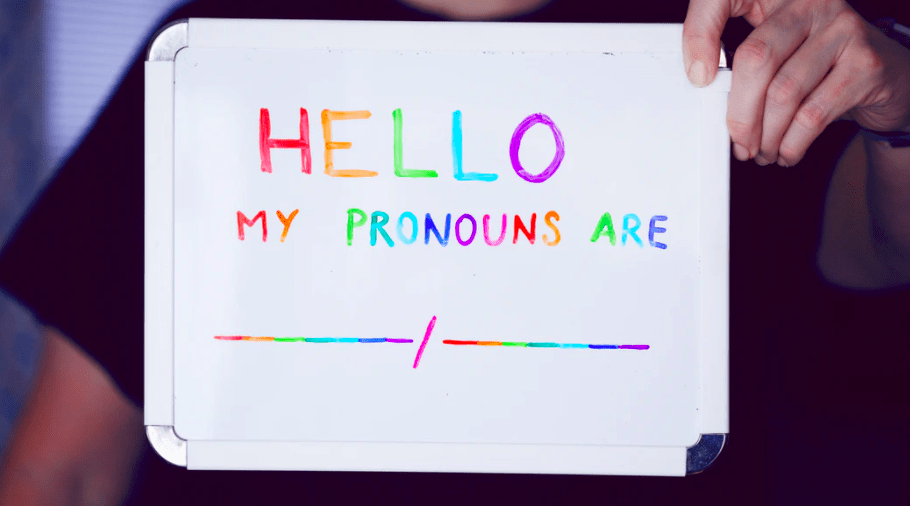 Different voices at UCCS discuss why pronouns are important

Pronouns are words that function on their own, as a noun, and are used to refer to someone or something in place of their name. For example: “He likes cheeseburgers. She likes cake. They like to play.”

Lynn Vidler, dean of Letters, Arts & Sciences, believes pronouns are words used to talk about others but that these third person pronouns in English generally reflect a binary gender system. “That is, there are only two gender options: male and female. Not everyone’s gender identity falls within this binary system,” Vidler said.

“There are other gender-neutral pronouns that some non-binary people use, like xe/xem or ze/hir,” Vidler said. “Basically, when someone tells you their pronouns, use them.”

Irina Amouzou, women’s and ethnic studies (WEST) major and outreach coordinator for the Multicultural Office for Student Access, Inclusiveness and Community (MOSAIC), believes that the biggest misconception of pronouns is that they are gendered. Instead, Amouzou believes pronouns are simply words constructed in ways to humanize each other.

“So often people use pronouns like they/them on anybody regardless of gender but using they/them pronouns on a system does not make them nonbinary,” Amouzou said. “There are people who might identify as nonbinary but use he/him pronouns.”

According to Amouzou, language is malleable, and that does not change when it comes to pronouns. They believe that knowing someone’s pronouns is just as important as knowing their name.

Amouzou has exclusively used they/them pronouns for over a year. They said that they are misgendered often, especially by strangers who do not know them. Sometimes people in their life make this mistake too, and Amouzou believes it is because of the way people perceive them.

“That’s just the struggle of unlearning gender,” Amouzou said. “So, if people forget, the simple way to go about it is to just be like, ‘oh sorry,’ and then fix it right away instead of being hyper apologetic.”

Amouzou compared it to forgetting someone’s name — it is okay to forget if the person is respectful about it, apologizes and then moves on and attempts to get it right next time.

“I think everybody can identify with it. It doesn’t feel particularly great when somebody is using the wrong pronouns,” Beem said. “If somebody is calling you by the opposite binary, it’s uncomfortable.”

Beem engages in these conversations with the Trans* Student Union, which meets every other Thursday. It is a community where people share their experiences, go over topics like queer history and sometimes host movie nights or other fun events.

Through Beem’s personal journey and conversation with other students, they have learned that these topics are more complex than people may think. Everyone’s journey is different; people change and so do their pronouns. Someone may identify with certain pronouns, and then decide that they identify with different pronouns as they grow and develop throughout life.

According to Tre Wentling, assistant professor in the WEST program, the public automatically assigns pronouns based on people’s first names and physical characteristics. He believes it is wrong to assume gender based on appearance. Pronouns are just like a person’s name, race or gender and are not always obvious by sight or sound. To use the correct pronouns is to acknowledge someone’s personhood.

There was a consensus among interviewees that the best way to be respectful of someone’s pronouns is to just ask them. Wentling suggested being as direct as asking: “What pronouns do you use?” Wentling also mentioned that it does no good to simply ask what someone’s pronouns are if you are not going to use them.

“If one does the right thing to ask, then follow through with acknowledging and using the person’s pronouns,” Wentling said.

There are differing opinions on whether the UCCS community is respectful of personal pronouns or not.

According to Vidler, UCCS has been respectful overall to them, their pronouns and their nonbinary identity.

“I wouldn’t be here if it weren’t,” Vidler said. “The whole interview process was just as much about me exploring UCCS’s commitment to diversity as it was about UCCS evaluating my qualifications.”

Amouzou believes that UCCS attempts to be a respectful place for people with nonbinary pronouns, but they do not believe that the university is successful on a large scale.

“I can’t really speak for every single person on campus. But I had mixed experiences when it comes to pronoun usage, or recognizing them,” Amouzou said.

According to Amouzou, there are a couple of things that UCCS is doing right. Allowing students to change their pronouns on Canvas or place pronouns in their email signatures are some of those good things. But asking and correctly using preferred pronouns is not normalized on campus. To Amouzou, this is a systemic problem.

“We have diversity trainings centered around that, but I don’t think that they are in depth enough or always give the correct or full information,” Amouzou said.

Amouzou believes it begins at the University of Colorado (CU) system which trickles down to UCCS; if the system does not prioritize respecting genderqueer people as a diversified group, then UCCS cannot do it.

Wentling views UCCS as a complex place regarding pronoun usage and respect.

“In my experience, there [are] spaces—physical, virtual and ideological—where a pronoun practice is valued and other spaces where it has yet to become so,” Wentling said.

Wentling believes it is up to the people who make up the UCCS community to cultivate a culture that respects the personhood of each individual — making UCCS a respectful place for everyone.

The interviewees agreed that pronouns are an important topic, and that respecting pronouns upon being informed of them should be the expectation.