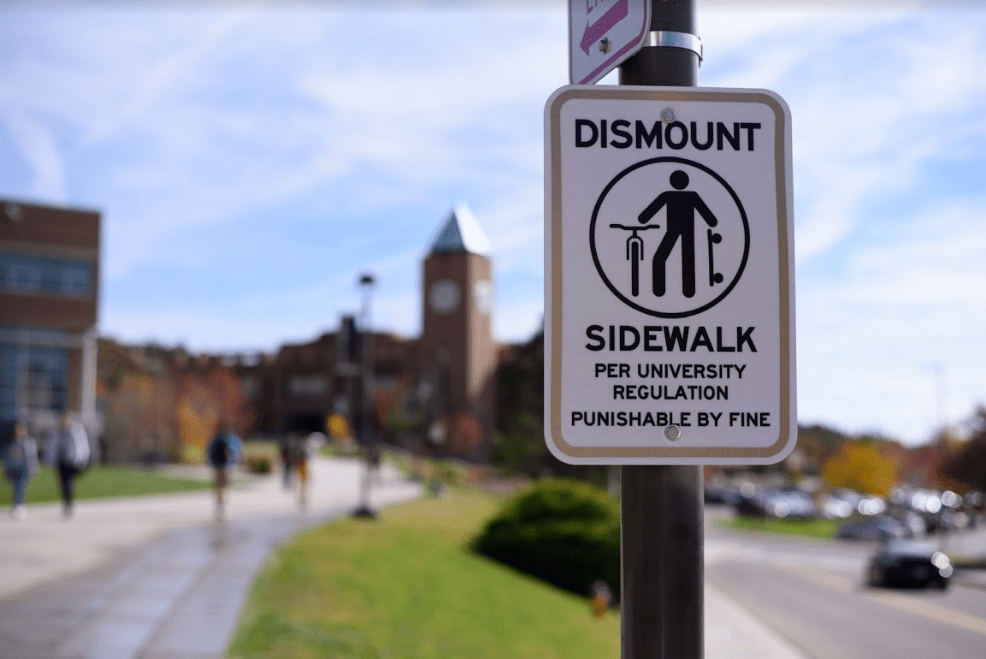 When UCCS was a smaller campus, the spine connecting Columbine Hall to the University Center was a route for shuttles. But once the student body grew, the shuttles were rerouted.

This semester, another change has been made to the spine and other busy walkways on campus: dismount zones prohibit travel by wheels, except for official campus vehicles.

Labeled dismount zones around campus are areas where cyclists, skateboarders and longboarders are subject to a fine if they are not on foot. Bicycles are still allowed on all streets, and wheels are allowed in areas that are not marked by the dismount signs.

Students will be subject to a $20 fine for violating the dismount zone signs; however, this fine can be decreased by $10 if it is paid within the grace period, a timeframe that has yet to be determined.

In May, Pino, the Gallogly Recreation and Wellness Center and UCCS Police began research on the dismount zones. SGA provided feedback during this process.

The chancellor’s leadership team also approved the dismount zones as the best solution to prevent injuries caused by biking or skateboarding through heavy pedestrian traffic or by cars hitting students on bikes or skateboards.

Officers are focused on educating the UCCS community about the dismount zones before tickets are issued.

“We’ve been trying to make sure people are aware of this rule before we begin active enforcement,” Pino said.

Pino said that for as long as he can remember, the Parking Rules and Regulations have held that skateboarding and cycling could be prohibited with signs.

According to Pino, the only changes to this rule are a lowered fine, from $30 to $20, and the actual installation of signs.

Though UCCS Police have not yet begun issuing warnings or citations for violating the dismount zone signs, some students have voiced their concerns about the signs.

Senior business administration major Will Riden has ridden a skateboard to get to classes since his first year at UCCS. He said he doesn’t see the need for the dismount zones.

“I did some research, but it kind of seems like it came out of nowhere and there wasn’t a lot of information out to the student body about it.”

Riden said he is careful about when and where he rides his skateboard so he does not cause any accidents.

“If classes just get out, I walk down the spine with my skateboard. Not everybody does that, but a lot of people ride slowly and in control,” he said.

According to Pino, the UCCS dismount zones are similar to those of other universities in Colorado, including CU Boulder, but other proposed solutions could be considered as well.

One suggestion Pino heard before the dismount zones were implemented was to educate students not to be on their phones while walking from one class to another.

“Students only have 10 minutes in between classes to communicate with friends and family, so it’s unreasonable to expect them not to have their phones,” Pino said.

On the UCCS Bulletin Board Facebook page, some students complained about their ability to get to classes on time and having to carry their bikes or skateboards because of the dismount zones.

One student questioned, “If the school wants to be a greener campus, why keep students from riding bikes and other things? There’s no point in taking it if you have to just walk and carry it all over the campus anyway.”

Kennedy Watson, vice president of SGA, has received both positive and negative feedback from students.

“In my opinion, it’s very 50-50. Half of the people that I’ve heard are very against it, and those are the people whose transportation was skateboarding,” said Watson.

“The other half, who predominantly don’t skateboard, are either pretty happy or apathetic about it.”

While Pino hasn’t personally received negative feedback from students, he said the UCCS Police have received fewer complaints than usual about pedestrians almost being hit by someone on a skateboard or bicycle.

“As times change and the campus grows, we have to continue to look at things to make sure everybody is safe,” he said.