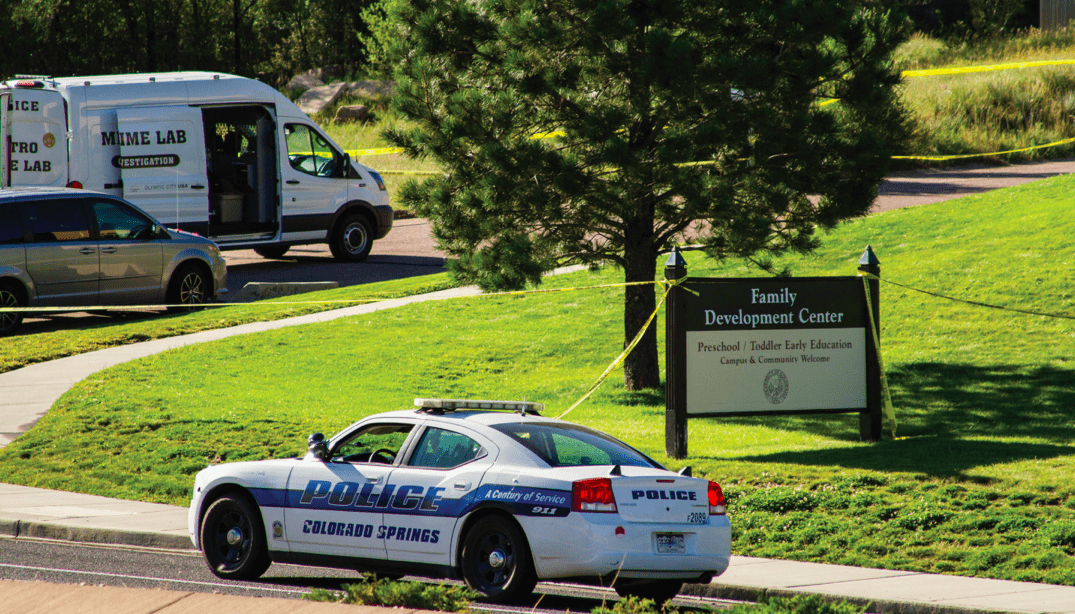 By: Travis Boren
In: News, Uncategorized

UCCS’ Family Development Center was closed for the day after an alleged shooting incident occurred on the night of Aug. 29.

Information released on the Colorado Springs Police Department’s (CSPD) police blotter indicates that a teenage male had been shot around 9:56 p.m. The young man was taken to a local hospital by friends where he was pronounced dead. This is the 21st homicide investigation opened in Colorado Springs since the start of 2018.

According to a press release posted to CSPD’s Public Affairs page, CSPD’s Violent Crimes Homicide Unit arrested and charged 22 year old Micahi Stacy Hughes with first degree murder in connection with the incident . As of Aug. 30, CSPD considers this to be an ongoing investigation.

The Colorado Springs Police Department said in the Aug. 30 statement that campus is safe and that the Family Development Center was closed for crime scene processing.

A UCCS text alert on Aug. 30 at approximately 3:20 p.m. indicated that the Family Development Center would return to full operations on Aug. 31.

The Assistant Director of University Communications and Media Relations at UCCS Jared Verner, forwarded the notion that campus is safe.

“All subjects are accounted for, so there’s no threat,” said Verner.

Verner indicated in a Communique article dated Aug. 30, that the suspect has never been a UCCS student.

“We’re putting out some messaging now for students who are traumatized,” said Verner. “We’re working with Stephanie Hanenberg to get that message now.”

Stephanie Hanenberg Executive Director of Health and Wellness, invited members of the UCCS community to seek counseling if necessary at the Wellness Center.

“Faculty, staff, and students desiring counseling services following the incident at the Family Development Center can find support or community resource information by contacting the UCCS Wellness Center at 719-255-4444 or the UCCS Human Resource Office at 719-255-3372. Employees may also contact the Colorado State Employee Assistance Program at (303) 866-4314 or (800) 821-8154,” said Hanenberg via email.

The Colorado Springs Police Department urges anyone who witnessed the incident at the Family Development Center to reach out at (719) 444-7000, or to call the Crime Stoppers Tip Line at (719) 634-STOP (7867) if anonymity is a concern.